Our Transit Across the Son

Just how significant is my life? 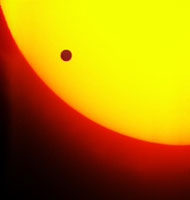 Did you see Venus' transit across the Sun last week? It is one of those seldom seen celestial events that catches the attention of stargazers across the world. Unlike a solar eclipse where the moon's placement can temporarily cover most of our view of the sun, Venus' transit is a more modest event. For about an hour, a small round dot crosses the face of the sun. At first glance (Of course no one can really glance or look directly at the Sun without eye protection!), the transit witness is not sure he or she is really seeing anything at all. The size of Venus outline by the background of the blazing sun is tiny. However, the steady progress of Venus across the face of the sun confirms that we are not imagining the dark speck's presence. Instead, Venus' place in our solar system is revealed. It is a small presence, dwarfed in size and significance by the Sun's blazing light.

The Holy Spirit tells us that the Son is God's ultimate message. Not only that, his glory shines with the glory of God. The universe finds its meaning, purpose, and design in him. Yet he chose to re-define the meaning and purpose of our lives by sharing his light and giving his life to cleanse us and make us right for the glory we will some day share with him. Until that day, he lives in glory to help us in our transit through this life and save it from insignificance and death.

Long ago God spoke many times and in many ways to our ancestors through the prophets. But now in these final days, he has spoken to us through his Son. God promised everything to the Son as an inheritance, and through the Son he made the universe and everything in it. The Son reflects God's own glory, and everything about him represents God exactly. He sustains the universe by the mighty power of his command. After he died to cleanse us from the stain of sin, he sat down in the place of honor at the right hand of the majestic God of heaven. ... Because God's children are human beings — made of flesh and blood — Jesus also became flesh and blood by being born in human form. For only as a human being could he die, and only by dying could he break the power of the Devil, who had the power of death. Only in this way could he deliver those who have lived all their lives as slaves to the fear of dying. ... Therefore he is able, once and forever, to save everyone who comes to God through him. He lives forever to plead with God on their behalf. (Hebrews 1:1-3; 2:14-15, 18; 7:25 NLT)

He gives it destination and purpose.
A life finds its purpose in him. He gives it hope and meaning. He gives it destination and purpose. In a universe of darkness filled with dim specs of light, his glory puts this life into perspective, frames its journey, and offers it a background for its own significance. God wants each person to see his or her life as a transit across his Son — brief, but a brilliant and spectacular journey illuminated, defined, and given purpose by his Son's light.

"Our Transit Across the Son" by Phil Ware is licensed under a Creative Commons License. Heartlight encourages you to share this material with others in church bulletins, personal emails, and other non-commercial uses. Please see our Usage Guidelines for more information.