What does it take for God to his message to you? 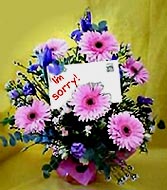 by Rubel Shelly (02/09/2005) | Special Features
Larry and Marianne have been having problems in their marriage of 17 years. She finally left him just over two weeks ago. "It was a culmination of things," he said. "But I am desperately trying to save our marriage."

Marianne left their home in Orlando, Florida, and went to her parents' home in Jacksonville. She changed her cell phone number so he couldn't reach her. Her parents have blocked him from entering their gated community. So he sent her five dozen roses. His goal was just to communicate. To ask forgiveness. To plead for the chance for the two of them to work on their relationship.

Lacking any response from his estranged wife, Larry took out a full-page ad in last Tuesday's Florida Times-Union. "I can only hope you will give me the chance to prove my unending love for you. Life without you is empty and meaningless." The cost of a full-page ad means that Larry sent Marianne a $17,000 apology.

I don't know any more of the story. I have no opinion on the salvageability of their marriage. I hope things can be worked out between them, for relationships are ultimately all that matter in this life. But the story sounded strangely familiar.

Redeemer God has been on a mission for centuries now. Although he is the aggrieved party, he has been taking it upon himself to communicate with his estranged creatures. Loving us as a concerned Father who is grieving his prodigal sons and daughters, he has struggled to communicate his deep love and concern.

In the past God spoke to our forefathers through the prophets at many times and in various ways, but in these last days he has spoken to us by his Son .... (Hebrews 1:1)

How are we to understand this biblical text?

God wrote his message in blood.
After sending Moses and Deborah and Isaiah to deliver dozens of pleas and warnings, it was time to pull out all the stops. When the roses had been ignored, he put a billboard on a hilltop just outside Jerusalem. Written there for all the world to see, he declared his intention to heal a broken relationship.

In a forgiveness ad that cost far more than full-page ads in The New York Times, London Telegraph, and Pravda, God wrote his message in blood. He said that you mean more to him than life itself. That there is nothing he would not give to have a relationship with you. That he will not give up on you without a fight.

A relative told Larry that his wife had seen his message. "She said my wife read the ad and started crying," he said. "But so far I've had no response from her."

I suspect you've heard about God's forgiveness ad. I'd be surprised if it has not touched you. I hope you won't leave him wondering about your response.

"The Forgiveness Ad" by Rubel Shelly is licensed under a Creative Commons License. Heartlight encourages you to share this material with others in church bulletins, personal emails, and other non-commercial uses. Please see our Usage Guidelines for more information.