Can anything good come out of a serious motorcycle injury? 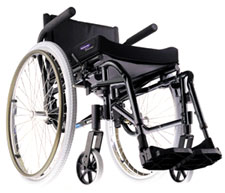 I was taken aback for a moment and then realized he was joking. Never again would he trot up the stairs, climb on the roof, or rev up his motorcycle engine before he burned rubber out of the parking lot.

Curt was adept at taking things apart and fixing them. He enjoyed his job as maintenance man at an apartment complex. The tenants enjoyed his good humor. (One time he filled a tenant's apartment with helium balloons while she was at work.)

Young women considered the lanky man good-looking. He had time for dating and for late night partying with his friends, but he put off allowing God into his life. After all, he was young, independent, and self-sufficient. He shied away from people who mentioned Jesus or worshipped and prayed to a Creator.

Until the night he drank too much alcohol, climbed on his motorcycle, and sped away with his mother sitting on the seat behind him. The motorcycle left the road at a high rate of speed and slammed into a tree. His mother suffered major injuries, but she would live. Curt was not expected to survive.

It was touch and go for a while, but Curt did survive. The word "miracle" was used. The only one who was unhappy about the news was Curt. When he was conscious and able to comprehend the extent of his injuries, he pulled out the needle to his IV line and disconnected everything within reach. His life, he believed at that moment, was over.

It was a long and painful recovery. His mother renovated her trailer to accommodate his new lifestyle. He was now a paraplegic, no longer totally independent and self-sufficient. He would never walk again.

The day he took his first solo bus ride, he maneuvered his wheelchair through the apartment complex and into the office for a leisurely visit. He had retained his wonderful sense of humor, but he had changed. He believed he survived for a purpose and he now had time for God in his life.

He believed he survived for a purpose.
I never saw Curt again so I don't know the end of his story, but God is able to change hearts and lives so I have always had hope that Curt learned to walk in the Spirit when his physical legs could no longer hold him upright.

He [God] gives strength to the weary and increases the power of the weak. (Isaiah 40:29 NIV)

"Independent and Self-Sufficient" by Janice Price is licensed under a Creative Commons License. Heartlight encourages you to share this material with others in church bulletins, personal emails, and other non-commercial uses. Please see our Usage Guidelines for more information.