What would you see if you had new windows in your church? 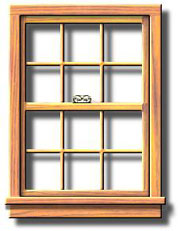 When he saw the crowds, he had compassion on them, because they were harassed and helpless, like sheep without a shepherd. Then he said to his disciples, "The harvest is plentiful but the workers are few. Ask the Lord of the harvest, therefore, to send out workers into his harvest field." (Matthew 9:35-38)

A few months ago we got new windows in our church building. They're a big improvement over the old ones, in a lot of ways. They're more energy-efficient. They let less cold air in during the winter. They look a lot nicer. But the big difference that we've noticed has been in the auditorium.

The old windows were frosted glass — translucent. They let in some outdoor light, but not a lot. They left the auditorium, even on sunny days, kind of dark and half-lit. When we ordered the new windows, we ordered them with one of each window's two panes clear. The result has been striking. Much more light inside. And we can see out. (The number of folks staring out the window during the sermon has not seemed to increase!)

It strikes me that our new windows serve as a pretty good metaphor for the kind of church I want us to be. I think we should be a church with clear windows. A church that is enlightened by what's happening on the other side of our walls and a church that can see beyond ourselves to the people "out there." I want the conditions and circumstances of the world outside ourselves to pierce through the barriers that we sometimes tend to hide behind. I want us to be able to look out and see those outside clearly enough that we can learn to care about the people on the outside.

I want us, in short, to be a church like Jesus.

See what characterized his life?

Jesus "went through all the towns and villages." He taught in the synagogues. He healed the sick. He didn't build a nice building and wait for people to come to him. He didn't expect that people who hadn't met him yet would have the same concerns and priorities he had. He went to them. He met them where they were. If they were sick, he healed them. If they were hungry, he fed them. If they were searching, he taught them. His windows were clear, not clouded by selfishness or self-righteousness or fear or sin or faithlessness. He saw the world as it was, not as he wished it would be or thought it should be ... but as it was. And he obeyed his Father by holding up the gospel like a diamond to let it catch the light so that its facets flashed and people saw in it just what they needed most. He was confident that as he involved himself in the lives of people his Father would change their hearts and they would begin to catch a vision of his Kingdom. It was okay, at first, if they thought that he was just a miracle-worker or teacher or philanthropist. He knew that they'd eventually realize who he really was.

I'd like us to be a church like that — a church for Monday through Saturday, not just Sunday. I'd like us be a church that wades through the muck of the world serving and healing and teaching. I want us to go out there and not expect the world to come to us. I want us to live our lives like Jesus; totally to do our Father's business, completely given to cracking open the door to his Kingdom with our words and actions. I want us to believe without fail that God indwells our efforts and that he will work to rearrange their priorities and reorient their perspectives and help them to realize who Jesus really is and what he came to do.

Are you a person who cares about what you see?
Do you see why Jesus did what he did? "When he saw the crowds, he had compassion on them." Right ... got it ... compassion!

I'm afraid sometimes that even booming, growing, evangelistic churches aren't always evangelistic out of compassion — out of fear, maybe. Out of pride, perhaps. Out of a desire to be bigger, a lot of times. But out of compassion? Maybe I'm cynical, but I'm afraid compassion is just too far down our lists. When Jesus saw harassed, helpless people, he didn't get judgmental. He didn't indulge himself in feelings of self-righteousness or religious pride. He didn't feel superior or get outraged over their sins. He didn't feel clinical detachment, seeing them as theological case studies on what happens to people when they try to live away from God.

He felt bald and naked compassion for them. He saw people trying to carry on with no understanding of their Father in heaven and his heart sank, his insides twisted, and he felt like crying. "They're like sheep without a shepherd," he told his disciples. Lost and defenseless and one wrong step away from death by accident or predator. It broke his heart to see them like that. He told his disciples to pray that God would raise up a few more who could feel the same way he did and help them find their way home.

I assume they obeyed Jesus and prayed for that very thing. And I believe that God has answered that prayer in this day by sending out the church — not just THE church, but YOUR church ... YOU.

What about it? Are you part of the answer to the disciples' prayer? Are you a person with clear windows who can see the world outside your tight little circles? Are you a person who cares about what you see? You don't have to move, or change jobs, or take up preaching on street corners. There are plenty of harassed, helpless people who need to know Jesus right where you live, work, study, shop, and play. They are your next door neighbor suffering through a divorce, the guy in the cubicle next to you whose wife was diagnosed with cancer, the friend who's just lost his job and is close to losing his house. They and people like them need to hear the gospel of the Kingdom proclaimed. They need to see it enacted. And God has put YOU where you are for just that purpose. The harvest is still plentiful; there are still a lot of sheep who need to find their way to their shepherd. Can you see them? Do you care?

If not, maybe it's time for new windows.

"New Windows" by Patrick D. Odum is licensed under a Creative Commons License. Heartlight encourages you to share this material with others in church bulletins, personal emails, and other non-commercial uses. Please see our Usage Guidelines for more information.