What can we do to restore sanity and balance in our sexually charged world? 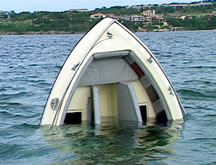 "I have taken an oath never to let my eyes linger on a girl." (Job 31:1 Revised English Bible)

A couple of Sundays ago in Texas might have seen the strangest nautical accident in the history of nautical accidents. A double-decker party barge loaded with passengers capsized in Lake Travis, near Austin, Texas. This sent 60 people into about 39 feet of water for a surprising Sunday "baptism." Fortunately they were all rescued, and the only two injuries were minor.

There's nothing that strange about a boat capsizing, of course; that happens. Nor does the reason the boat capsized make the accident all that strange; it tilted and then took on water due to uneven weight distribution when most of the passengers moved to one side of the boat.

Travis County Sheriff spokesman Roger Wade was quoted after the accident as saying it was "unclear" why so many people were on one side of the boat. Maybe he was being charitable. The boat was tied up at Hippie Hollow, the only public nude beach in Texas.

We live in a sexually-charged and sexually-preoccupied culture. That's such an obvious statement that it borders on inane. In an age that so values self-expression, isn't it interesting that so much of what we feel the need to express (to whomever will pay attention) is sexual?

Immorality has become normal, while chastity is so out of fashion that we don't even use the word anymore. Homosexuality is fast becoming just as accepted. Unfaithfulness in marriage, while still not usually admired, is almost "winked at" in many circles. Pornography, historically only available to those willing to be seen in the red-light district, now flows into respectable living rooms and offices through videos and the Internet. Mainstream movies and TV package sex less explicitly, but no less enticingly. Pop stars flash as much skin as they can, and advertisers use sex to hypnotize consumers into buying.

What do believers do in a world like this? How do we maintain God's standards in such a society?

The answer is that we don't seem to maintain those standards. Oh, we point fingers. We argue in public forums against the agendas of homosexual activists. We participate in boycotts to target businesses that advertise on TV shows that offend our sense of morality. We shake our heads over the declining standards of morality around us. But you want to know the truth? Far too often, we join the stampede to look at whatever our hyper-sexual culture puts on display for us. And families, churches, and individual lives are being swamped because of it.

Our culture needs to hear and see more from the people of God about sexuality that's pure and honorable and holy!
Oh, how that hurts to hear. But, I have to admit that it's true. We can't blame the media; they usually only churn out what they know we'll buy. Can't blame the internet; thousands of new pornographic sites come on-line each day because there are millions of people willing to pay the fees to access them. We can't blame advertisers or MTV; we still snap up the products and music and the lifestyle they sell. And, while we're being honest, can I just say that a lot of us aren't just enablers? There are "Christians" on those web sites ... and in the back rooms of video stores ... and carrying on affairs. There are Christians whose lifestyles teach their children and the children in their churches, that sex outside marriage is OK for grownups.

Here's what I propose we do about our hyper-sexual culture. I propose that we start with ourselves. I propose that we start making some commitments not to let our eyes linger where they shouldn't. Sexual sin, you might remember that Jesus said, begins with a long look — whether it's at a picture or an image on a screen or a flesh-and-blood person is immaterial. That'll mean that we'll have to take some radical steps sometimes. To turn off a TV or walk out of a movie, to turn and look at a shop window instead of the person walking by, and to use a filter or accountability software on a computer. It might even require some downright terrifying steps — to admit our struggles to a fellow believer and ask for help; to confess an affair; to end an immoral relationship; and to get qualified counseling and spiritual support to break free of what is sexually controlling us.

As our culture tips more and more dramatically toward whatever disaster waits for societies completely saturated in sex, wouldn't it be nice if the people of God were moving purposefully toward the other side of the boat to help balance out our overturning culture? Wouldn't it be nice if believers, by the weight of our chaste actions and convincing lives, could tip things back toward sexual sanity and sobriety?

I don't mean that we treat sex as if it's bad; part of our argument must be the intimacy and fulfillment that comes from sex within marriage is more than satisfying, it is blessed and joyous. And I don't mean that we should beat people up who are hypnotized by the worldly view. Some of us can relate to their struggle, can't we? I'm saying that our culture needs to hear and see more from the people of God about sexuality that's pure and honorable and holy.

You can begin today by making a vow, a "covenant with your eyes," that you will not rush to the railing to peer at the peep show our culture has become. Make that vow. And begin to do what's necessary to keep it. God forgives the penitent; don't dwell on past mistakes in this area. But please, begin today to pursue sexual purity. Your children will notice. You community will notice. Most importantly, you will be more available to the Holy Spirit and to your spouse. And God will notice and bless your choice to honor him with your eyes and body.

The deck's tilting. Make your choice, and make it count.

"Balancing a Tilting Boat" by Patrick D. Odum is licensed under a Creative Commons License. Heartlight encourages you to share this material with others in church bulletins, personal emails, and other non-commercial uses. Please see our Usage Guidelines for more information.