What can a giver hope to find in giving? 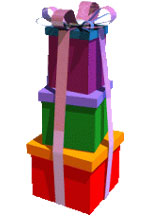 by Kelly Breece (05/14/2004) | Together in His Grace
"Okay guys, let's all come over here and let Shane open his presents," I instructed the children. His first birthday party was proving to be a raving success as the children from one to nine relayed from the trampoline to the tricycle races in the driveway to another bite of their peanut butter and jelly sandwich that I had made.

I was surprised at the excitement of all the children as they watched Shane rip off the paper of each carefully wrapped package. Many of the kids had personally picked out a gift for him and were anxious for him to get to theirs. I held each one up and read the card attached as if he knew what I was saying.

There were many friends and family-members standing around us. I saw so much love and thoughtfulness surrounding my precious son. Shane, on the other hand, saw brightly colored paper and bows and boxes that he just wanted to get his hands on and explore. He ripped into each one with abandon and revealed each brand new toy.

As any child of one will do, Shane impatiently moved onto the next package before the last was completely unwrapped. We could all feel his elation; he was being allowed and, in fact was encouraged, to vigorously tear into each gift. It was pure joy to watch him relish in his special day.

The next afternoon after the toys were put away, the tables and chairs folded, and all the sports-themed decorations taken down, we decided to assemble some of the toys that Shane had received. As a Mom, I just wanted his excitement to continue.

As I cut plastic ties, peeled off tape, and snapped pieces together, what once was just a really colorful cardboard box had now become a toy, with little animals that made wonderful noises. The bird sang. The bear roared. The walrus barked. He loved it. I must have heard the music that accompanied this toy 30 times in the hour that we sat in the floor and played with it. It was wonderful to watch my son discover and enjoy and develop his skill in making that bear roar in sync with the music. The true purpose of this gift was being seen and felt.

Something else occurred that was wonderful. God, through Shane's innocent joy, revealed something powerful to me that afternoon. He showed me what it felt like to delight in watching my son receive love-filled gifts.

Do we enjoy the gifts that God has given us?

Do we see the beauty in the magnificent wrapping of each one?

That gift came from me.
Do we allow ourselves the excitement of tearing into each one when they are handed to us?

Or ... do we place them, still in the package, on a shelf? If so, why? Do we feel undeserving? Have we chosen not to open them because such gifts in the past have proven to evoke guilt?

Just as I found delight in seeing my son play that song over and over to his heart's content, so God enjoys watching us relish in the gifts that He's lovingly given to us. In His perfect wisdom, He's devised a plan whereby we, as his children, can receive without reluctance, his gifts, talents and passions. In turn, use them to serve Him. In His plan, every one of His children shares, everyone wins, and everyone receives joy.

Can't you just hear God's voice saying, "That gift came from me. Figure it out. Develop it. Use it to help Me and then enjoy all the happiness from it that you can stand. That's okay with me."

Rick Warren put it this way, "Everything created by God reflects his glory in some way." (The Purpose-driven Life) James, the brother of Jesus, says it even more eloquently, Every good and perfect gift is from above, coming down from the Father above, who created all heaven’s lights. Unlike them, he never changes or casts shifting shadows. In his goodness he chose to make us his own children by giving us his true word. And we, out of all creation, became his choice possession. (James 1:17-18)

"Heart's Content" by Kelly Breece is licensed under a Creative Commons License. Heartlight encourages you to share this material with others in church bulletins, personal emails, and other non-commercial uses. Please see our Usage Guidelines for more information.