What are you trading away of great value? 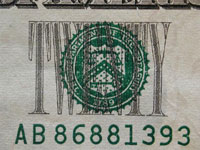 by Alan Smith (01/23/2004) | Timely Truths
Here's another of those "stupid criminals" stories to help us see a crucial point!

A man walked into a convenience store, put a $20 bill on the counter and asked for change. When the clerk opened the drawer, the man pulled a gun and asked for all the cash in the register.

The man took the cash from the clerk and fled, leaving his $20 bill on the counter.

So how much did he get from the drawer? Fifteen bucks.

How often have we done the same thing, given up something of value in an attempt to get something else of even more value, only to be disappointed in what we ended up with?

Remember Esau? He left his birthright on the counter as he grabbed a bowl of stew and ran! Not a smart trade!

Don't make any foolish trades today. Hold on to that which is most important.

"Foolish Trade" by Alan Smith is licensed under a Creative Commons License. Heartlight encourages you to share this material with others in church bulletins, personal emails, and other non-commercial uses. Please see our Usage Guidelines for more information.