Breaking Away From Our Leash

Can you break away from the things that are holding you back? 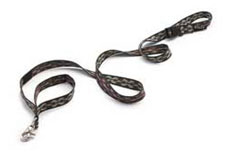 by Russ Lawson (01/21/2004) | Special Features
Our little two-and-a-half year old grandson, Christopher, loves to come to our house. He especially loves to take our little black dog, Chewy, out for a walk. Let me set the scene of a dog-walking event from about two months ago for you.

We live in the country with crops planted on three sides of our property. Since we live in the country, we have to take some special precautions with our dog. We have both Coyotes and Turkey vultures (very large vultures) in the area. Our little dog is just that — "little." She is a cross between a miniature Poodle and a Pekinese, called a Peek-a-poo. She stands about ten inches tall with legs that are about six inches long and weighs all of 5 1/2 pounds. So as you can imagine, she would make a good snack for these other hungry country critters. We always take her outside for her walks on a leash.

On this particular day, Grandma and Christopher's mom, Mylinda, took him outside along with the dog. The 35 pound Christopher was holding the leash for the 5 1/2 pound Chewy. They walk out to the side yard where Chewy spies a rabbit and takes off at full speed for it. She reaches the end of the 16-foot leash and yanks it out of Christopher's hand. Suddenly, the race is on.

The rabbit heads out across the field with the dog in hot pursuit. The rabbit is running for its life and the dog is ten foot behind, with the leash bouncing up and down as Chewy runs across the field with Grandma screaming for her to stop — of course, Chewy has developed temporary deafness. That's about the time our son, Kirk, and I walked out of the house and saw what was happening.

Now, you would think the rabbit would have no trouble getting away from the dog. The dog has those little short legs running full tilt through a field of tall Alfalfa hay with the leash trailing along behind her. Believe it or not, she was actually closing in on the rabbit as they circled around and got close enough to our daughter-in-law for her to grab the leash and end the show.

Now I'd like to make a spiritual lesson out of this story. You see, now every time she goes out of the house, Chewy looks for the rabbit. She strains at the leash. She stares at the field. She smells the ground. Chewy is longing for the opportunity to have the pursuit all over again. She longs to chase that rabbit she almost caught.

I understand that Poodles were originally bred as hunting dogs. Only later were they turned into lap dogs. The flame of little Chewy's hunting blood has been kindled and it doesn't look like it is going to go out. She now has a goal in her life — she is going to find that rabbit once again!

The apostle Paul wrote, "I strain to reach the end of the race and receive the prize for which God, through Christ Jesus, is calling us up to heaven." (Philippians 3:14) Isn't that what each of us who have been redeemed by the blood of Christ should be doing? Shouldn't we be straining against whatever is holding us back to reach the goal God has given us ... to win the race the Lord has set before us. Jesus called us to, "Seek first his kingdom and his righteousness." (Matthew 6:33) To "seek" literally means "to strive for" or "to crave for" something. We should long, look, and seek the Kingdom even more than Chewy longs to find that rabbit.

Therefore, since we are surrounded by such a huge crowd of witnesses to the life of faith, let us strip off every weight that slows us down, especially the sin that so easily hinders our progress. And let us run with endurance the race that God has set before us. We do this by keeping our eyes on Jesus, on whom our faith depends from start to finish. He was willing to die a shameful death on the cross because of the joy he knew would be his afterward. Now he is seated in the place of highest honor beside God's throne in heaven. Think about all he endured when sinful people did such terrible things to him, so that you don't become weary and give up. (Hebrews 12:1-3)

"Breaking Away From Our Leash" by Russ Lawson is licensed under a Creative Commons License. Heartlight encourages you to share this material with others in church bulletins, personal emails, and other non-commercial uses. Please see our Usage Guidelines for more information.