Cloning the Son of God?

Surely this can't be done in the test tube or research laboratory? 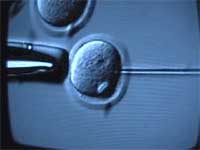 Several years ago, several news agencies reported the efforts of a group to clone Jesus Christ. The goal of this group was best stated in their own words:

"The Second Coming Project is a not-for-profit organization devoted to bringing about the Second Coming of Our Lord, Jesus Christ, as prophesied in the Bible, in time for the 2,000th anniversary of his birth. Our intention is to clone Jesus ... by taking an incorrupt cell from one of the many Holy Relics of Jesus' blood and body that are preserved in churches throughout the world, extracting its DNA, and inserting into an unfertilized human egg ... The fertilized egg, now the zygote of Jesus Christ, will be implanted into the womb of a young virginal woman (who has volunteered of her own accord), who will then bring the baby Jesus to term in a second Virgin Birth.

"If all goes according to plan, the birth will take place on December 25, 2001, thus making Anno Domini 2001 into Anno Domini Novi 1, and all calendrical calculations will begin anew ...

"No longer can we rely on hope and prayer, waiting around futilely for Jesus to return. We have the technology to bring him back right now: there is no reason, moral, legal or Biblical, not to take advantage of it." (source: the now defunct http://www.clonejesus.com)

Do we really believe that the uniqueness of Jesus Christ was in his DNA?
This group in California claimed to be soliciting contributions to fund their effort. When I first heard of this, I thought it was a joke. It HAD to be a joke. And, fortunately, it turned out to be just that.

There are a lot of things which disturbed me about the thought of taking it seriously. Setting aside for a moment the morality of human cloning and the questionable authenticity of the "holy relics," there seems to be an even greater issue at the heart of all this.

Do we really believe that the uniqueness of Jesus Christ was bound up in his DNA? That what made Jesus special was found in his chromosomes? That we can "re-create" God if we just have the right genetic code? I can think of few things more foolish.

Jesus was indeed human — every bit as human as we are. But what made him special, what made him unique, was his "Godhood," and that is something which will never be created in a test tube.

Oh, and by the way, our wait for the return of Jesus Christ is not in the least bit futile. He is quite capable of returning just as he promised he would ... without our assistance. When I look around at a world which refuses to acknowledge Christ for who he really was, I pray that it will be soon.

"Cloning the Son of God?" by Alan Smith is licensed under a Creative Commons License. Heartlight encourages you to share this material with others in church bulletins, personal emails, and other non-commercial uses. Please see our Usage Guidelines for more information.