Can you sit cross-legged on the floor? 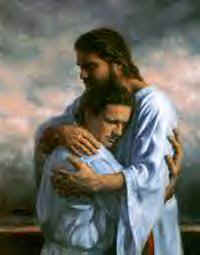 by Alan Smith (01/03/2004) | Timely Truths
The following story has been around for quite a while, but continues to touch hearts. The author is unknown to me:

The little church building's aisles swelled with the unusually large gathering until there were no more pews to squeeze into. A few more latecomers shuffled down the aisle and leaned against the wall.

Then I noticed Andy's entrance. His smile beamed with a special joy until he saw that "his" spot on the back row was filled. Regular attendees usually left the seat empty, knowing that Andy would arrive late from the home for the mentally handicapped. Confusion masked his face as the opening song ended and he had found no place to sit. With characteristic simplicity Andy made his way up the center aisle to the large clearing just below the podium. He lowered his huge body to the floor, crossing his legs Indian style.

As the rest of us sat down, another man, a leader in the church for many years, left his place in the pew and started up the center aisle toward Andy. It took a long time for Marvin to reach the front. Respect for this eighty-year-old servant, much loved by all of us, or perhaps sheer curiosity, brought a hush over the whole church. Even the minister gripped the sides of the podium and watched. Slowly Marvin shifted his lean frame onto his cane and lowered his aged body to the floor beside Andy.

With tears in his eyes, the minister closed his Bible over his sermon notes. "Our sermon has just been preached," he said.

Know someone with a special need — someone mentally handicapped, someone sick, someone who seems to have no friend, someone forgotten by most other people? Why not make a special effort this weekend, this month, and this new year to touch his or her life in a special way? You won't regret it! And as you do, if you will look closely, you will see the smile of the Savior.

"Loving Like Jesus" by Alan Smith is licensed under a Creative Commons License. Heartlight encourages you to share this material with others in church bulletins, personal emails, and other non-commercial uses. Please see our Usage Guidelines for more information.