Red to Honor, White to Remember

What will you do to remember and honor your mother? 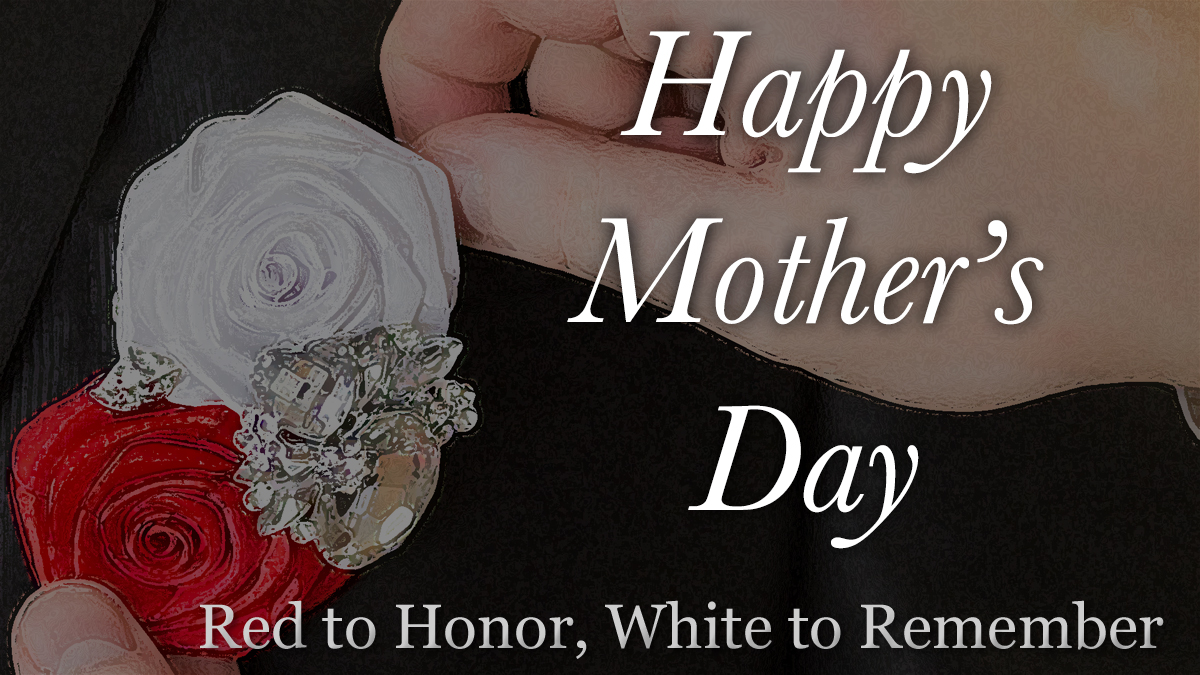 Charm is deceptive, and beauty does not last; but a woman who fears the Lord will be greatly praised. Reward her for all she has done. Let her deeds publicly declare her praise (Proverbs 31:30-31 NLT).

This Sunday we will wear our white flowers.

Growing up in a family with no sisters and only one brother, I resented and even hated some of the chores my mother assigned me — dusting furniture, washing dishes, cleaning windows — "girlie work!" But there was one chore I neither hated nor resented, maybe because I only did it once a year, but mainly because I sensed that it had special meaning.

Our small town was owned — literally — by the DuPont Company. DuPont owned the houses and rented them to employees. The company named the schools, owned the utility services, provided police and fire protection, and reminded us of its paternalistic presence daily. Old Hickory was the quintessential company town. Of course, the power plant belched black smoke and noxious fumes — practices common in those days. The ever-present rotten-egg smell from the chemical plant hung over us like a cloud. When visitors asked how we could stand it, we smiled and said it smelled like bread and butter.

As if to hide the worst features of an industrial plant, DuPont planted thousands of rambling rose bushes along the several hundred feet of chain link fence fronting the property. The flowers bloomed continuously for about ten months of the year, their beauty masking the reality inside.

Those rose bushes have everything to do with the once-a-year chore I loved. Early on a Sunday morning each May, I would run or ride my bike to that fence. I would search for the choicest rosebuds there, a red one for me, a smaller red one for my brother because he was younger, and white ones for my mom and dad. Taking out my pocket knife (every boy carried one in those days, blades honed to razor sharpness so we could whittle the thinnest shavings), I would carefully cut the chosen buds and take them home. We would pin them to our clothes and be ready for church on Mother's Day.

When we lived hundreds of miles away, and I could no longer snitch rosebuds from the fence at The Plant, I would make my annual phone call to the Friendly Flower Shop and order white flowers for my mother delivered to 81 Jones Circle. When I tell people about that annual chore and explain that a red flower meant your mother was living and a white one meant she was dead, they often get a puzzled look as if they've never heard the story. For our family, it's a tradition I hope we never lose. After I left home and Mary Margaret and I married, and our children came, the tradition continued. We still have those old color slides of our family ready for church, four little stair-step kids and mom and dad, all with red flowers on Mother's Day, and boutonnieres for the boys' corsages for the girls.

We knew the time was coming, but we were still unprepared. I remember the stunned realization as I ordered our Mother's Day flowers in 1997. "A red rose for me," I told the Kroger flower shop lady, "and a red corsage... no, you'd better make that white for my wife." Mary Margaret's mother had died the previous December, and for the first time ever, her Mother's Day corsage would be white. And I vividly remember my own emotions four Mother's Days later when, for the first time in my life, I wore white on Mother's Day.

Anna Jarvis began the practice that became our American tradition when she honored her own deceased mother with a special day of remembrance at a Methodist Church in Grafton, West Virginia in 1908. By 1914, she had campaigned so successfully that President Woodrow Wilson signed into law the proclamation passed by both houses of Congress, making Mother's Day a national holiday. Both Jarvis and the President insisted that the spelling be singular possessive — Mother's Day — to encourage a personal rather than generic observance.

This Sunday, we will wear our white flowers, and I will know why my mother always had a tear in her eye as she pinned on the white bud I so carefully selected. If you can still wear red, thank God! If you have to wear white, thank God! Red to honor... white to remember...

"Red to Honor, White to Remember" by Phillip Morrison is licensed under a Creative Commons License. Heartlight encourages you to share this material with others in church bulletins, personal emails, and other non-commercial uses. Please see our Usage Guidelines for more information.