His Hands Will Touch You, Too!

When you see this man, who do you see? 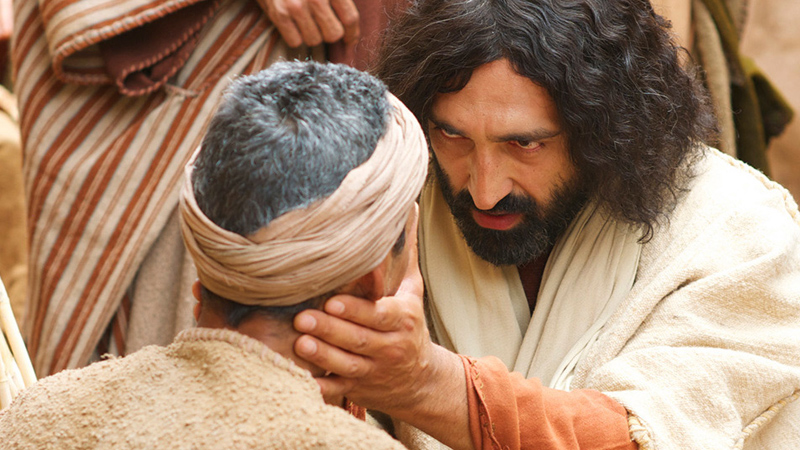 The old guy at the corner hasn't seen him. The woman selling the figs hasn't either. Jesus described him to the scribes at the gate and the kids in the courtyard. "He's about this tall. Clothes are ragged. Belly length beard."

No one has a clue.

For the better part of the day, Jesus has been searching up and down the Jerusalem streets. He didn't stop for lunch. Hasn't paused to rest. The only time his feet aren't moving is when he is asking, "Pardon me, but have you seen the fellow who used to beg on the corner?"

Finally, a boy gives him a lead. Jesus takes a back street toward the temple and spots the man sitting on a stump between two donkeys. Christ approaches from behind and places a hand on his shoulder. "There you are! I've been looking for you." The fellow turns, and, for the first time, sees the one who let him see. And what the man did next you may find hard to believe.

John introduces us to him with these words. "As [Jesus] passed by, he saw a man blind from birth" (John 9:1). This man never saw a sunrise. Couldn't tell purple from pink.

The disciples fault the family tree. "Rabbi, who sinned, this man or his parents, that he would be born blind?" (John 9:2)

Neither, the God-man replies. Trace this condition back to heaven. The reason the man was born sightless? So "the works of God might be displayed in him" (John 9:3).

Selected to suffer. Talk about a thankless role. Some sing to God's glory. Others teach to God's glory. Who wants to be blind for God's glory? Which is tougher — the condition, or to discover it was God's idea?

Jesus spat on the ground.

The cure proved to be as surprising as the cause. "[Jesus] spat on the ground and made clay of the spittle and applied the clay to his eyes" (John 9:6).

The world abounds with paintings of the God-man: in the arms of Mary, in the Garden of Gethsemane, in the Upper Room, in the darkened tomb. Jesus touching. Jesus weeping, laughing, teaching... but I've never seen a painting of Jesus spitting. Christ smacking his lips a time or two, gathering a mouth of saliva, working up a blob of drool, and letting it go. Down in the dirt. (Kids, next time your mother tells you not to spit, show her this passage.) Then he squats, stirs up a puddle of... I don't know, what would you call it?

Whatever the name, he places a finger-full in his palm, and then, as calmly as a painter spackles a hole in the wall, Jesus streaks mud-miracle on the blind man's eyes. "Go wash in the pool of Siloam" (John 9:7). 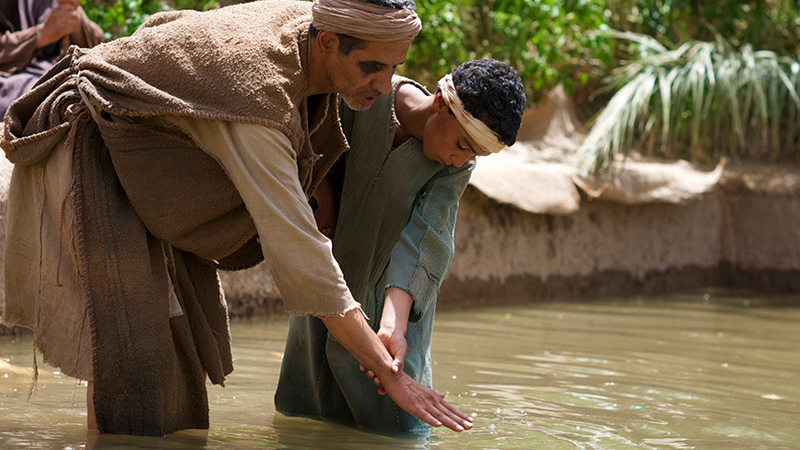 The beggar feels his way to the fountain, splashes water on his mud-streaked face, and rubs away the clay. The result is the first chapter of Genesis, just for him. Light where there was darkness. Virgin eyes focus, fuzzy figures become human beings, and John receives the Understatement of the Bible Award when he writes: "he came back seeing" (John 9:7).

How about "he raced back seeing"?

"He danced back seeing"?

"He roared back whooping and hollering and kissing everything he could for the first time see"?

The guy had to be thrilled.

We would love to leave him that way, but if this man's life is a cafeteria line, he's just stepped from the sirloin to the boiled Brussels sprouts. Look at the reaction of the neighbors. "'Is not this the one who used to sit and beg?' Others were saying, 'This is he,' still others were saying, 'No, but this is like him.' He kept saying, 'I am the one'" (John 9:9).

These folks don't celebrate, they debate!

They have watched this man grope and trip since he was a kid (John 9:23), you'd think they would rejoice. But they don't. They march him down to the church to have him kosher-tested. When the Pharisees ask for an explanation, the-was-blind beggar says: "He applied clay to my eyes and I washed, and I see" (John 9:15).

Again, we pause for the applause, but none comes. No recognition. No celebration. Apparently, Jesus failed to consult the healing handbook. "Now it was a Sabbath on the day when Jesus made the clay and opened his eyes... the Pharisees were saying, 'This man is not from God because he does not keep the Sabbath'" (John 9:14-16).

Will no one rejoice with this man?

No one saw him!
The preachers didn't.

Wait, here come the parents. But the reaction of the former blind man's parents was even worse.

They still did not believe that he had been blind and had received his sight until they sent for the man's parents. "Is this your son?" they asked. "Is this the one you say was born blind? How is it that now he can see?" 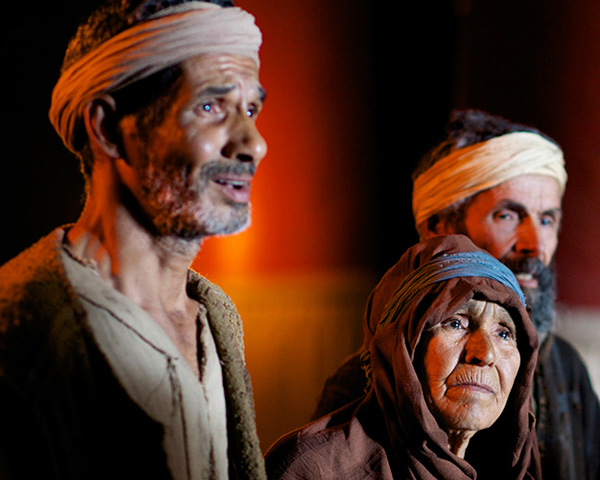 "We know he is our son," the parents answered, "and we know he was born blind. But how he can see now, or who opened his eyes, we don't know. Ask him. He is of age; he will speak for himself."

His parents said this because they were afraid of the Jewish leaders, who already had decided that anyone who acknowledged that Jesus was the Messiah would be put out of the synagogue. That was why his parents said, "He is of age; ask him."

How can they do this?

Granted, to be put out of the synagogue is serious. But isn't refusing to help your child even more so?

Who was really blind that day?

And now, here he is, on a back street of Jerusalem. The fellow has to be bewildered. Born blind only to be healed. Healed only to be kicked out. Kicked out only to be left alone. The peak of Everest and the heat of Sahara, all in one Sabbath. Now he can't even beg anymore. How would that feel?

You may know all too well. I know of a man who has buried four children. A single mother in our church is raising two autistic sons. We buried a neighbor whose cancer led to heart trouble that created pneumonia. Her health record was as thick as a phone book. Do some people seem to be dealt more than their share of bad hands?

If so, Jesus knows. He knows how they feel and he knows where they are. "Jesus heard that they had thrown him out and went and found him" (John 9:35 MSG).

In case the stable birth wasn't enough. If three decades of earth walking and miracle working is insufficient. If there be any doubt regarding God's full-born devotion, he does things like this. He tracks down a troubled pauper.

The beggar lifts his eyes to look into the face of the one who started all this. Is he going to criticize Christ? Complain to Christ? You can't blame him for doing both. After all, he didn't volunteer for the disease or the deliverance. But he does neither. No, "he worshiped him" (John 9:38).

And when you see him, you will, too.

Just as he came for the blind man, Jesus is coming for you. The hand that touched the blind man's shoulder will touch your cheeks. The face that changed his life will change yours. 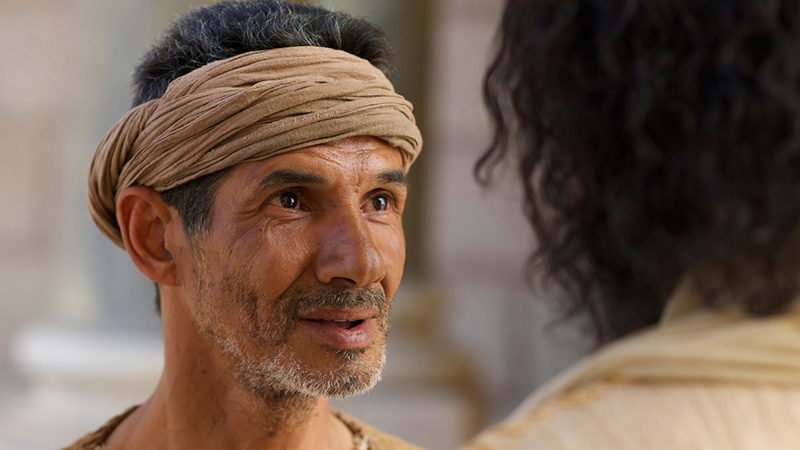 Excerpted by permission from Max Lucado's, Next Door Savior by Thomas Nelson, 2006.

Special thanks to Free Bible Images for the use of the graphics.

"His Hands Will Touch You, Too!" by Max Lucado is licensed under a Creative Commons License. Heartlight encourages you to share this material with others in church bulletins, personal emails, and other non-commercial uses. Please see our Usage Guidelines for more information.