Saving spiders for their kids to eat? 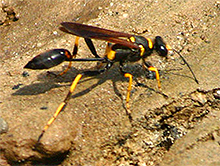 To feed their families, the mud daubers (dirt daubers) pack their dinners on my back porch. Spiders seem especially tasty to them, so they paralyze the main course and stuff them into their custom designed nursery units.

Mud daubers are members of the wasp family and are not hostile "stingers" as are some of their cousins. However, they are aggressive in another area: nursery construction and stocking of provisions.

In the summer, the female frequents the edges of a mud puddle where she rolls wet dirt into tiny balls about the size of a BB. Then, she flies one uniform ball at a time, held in her mandibles (jaws), to her construction site. Pellet by pellet she constructs tubes shaped like organ pipes.

The females in South Texas seem partial to the mortar indentations on my bricked back porch. Bit by bit, BB by BB they carry out their mission to ensure the survival of their young. 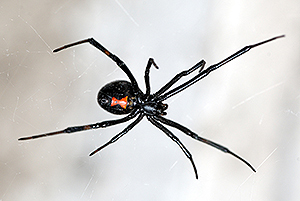 Upon completion of one nursery tube, mama mud dauber lays an egg, right on top of the food supply. Yes. On top of paralyzed spiders. She's done her homework. The spiders will not harm the larvae when they hatch, they will only nourish the larvae. Each species of mud daubers prefers certain types of spiders for their nursery pantries. One even prefers the immature black widow spider for its food supply. Horrifying to me, but mud dauber moms seal their unborn in cylinders with live spiders. However, the precautious moms have made sure that harm cannot come to the next generation.

As they age, our children will face daunting trials and temptations. Recently, one mother bemoaned the wrong actions of her eleven-year old, her first-born. I longed for her to recognize the reality of what happens as children age. Perhaps I was a bit blunt, but I said to her, "Unfortunately, he is growing into a sinner. It happened to you and me, and it's happening to your son."

Let's paralyze evil's impact on our children!
The story of Joseph illustrates how kids grow into sinners. Those twelve brothers were once innocent toddlers dandled on their mothers' knees. Later, Joseph's brothers in jealousy and revenge sold him to Midianite merchants. In an additional act of deception, they showed their father a blood-soaked coat that Joseph had worn. Their dad reasoned that Joseph—mauled by a wild beast—was dead. The sons did nothing to correct his assumption.

Meanwhile in Egypt, the lonely teen Joseph eventually grew to a position of power, and even though he was human and subject to sin, he walked in God's plan to store food and save thousands upon thousands during a seven-year famine. Years later, Joseph reunited with his brothers, recognized God's providential guidance, and said, "Don't be afraid." What his brothers had intended for harm Joseph knew "God intended it for good." Joseph "reassured them and spoke kindly to them" (Genesis 50:15-21). Our faithful and promise-keeping God had paralyzed evil and turned events; and by so doing, he fed the just and the unjust throughout the famine.

Later, to protect future generations, God told the Israelites to keep account of how he watched over them: Stay alert. Keep close watch over yourselves. Don't forget what you've seen. Don't let your hearts wander off. Stay vigilant as long as you live. Then God said, "Teach what you've seen and heard to your children and grandchildren" (Deuteronomy 4:9 MSG).

Throughout life, our little ones will meet harmful things, but as attentive parents we can teach our babes about God and about dangers. Through prayer, we call upon God to cocoon our babes and paralyze evil. I still pray this for my babies and they're 43 and 40! Now they are teaching their children about the thrills of knowing God and the tragedy of giving in to evil. 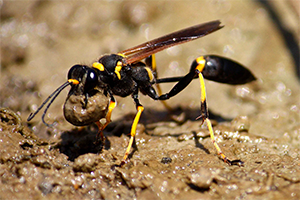 Are dirt daubers active in your area? Watch these mysterious wasps build their nurseries, and allow them to remind you of how they purposefully paralyze the spiders nestled in their offspring's cribs. Children can learn God's ways even when growing within a sinful culture as long as parents help disarm and paralyze evil dangers through godly examples.

Parents and grandparents, with dirt dauber determination, let's pray for our Father to watch over our nurseries and paralyze any harm that could influence, infect, or devour our young

"Mud Dauber Determination" by Cathy Messecar is licensed under a Creative Commons License. Heartlight encourages you to share this material with others in church bulletins, personal emails, and other non-commercial uses. Please see our Usage Guidelines for more information.