Do you feel as if our world has completely changed in its attitude toward faith?

And Saul approved of their killing him [Stephen].

On that day a great persecution broke out against the church in Jerusalem, and all except the apostles were scattered throughout Judea and Samaria. Godly men buried Stephen and mourned deeply for him. But Saul began to destroy the church. Going from house to house, he dragged off both men and women and put them in prison.

Those who had been scattered preached the word wherever they went

The first third of Acts records the story of a church dealing with change... and handling it pretty well.

As the book of Acts opens, it tells of a time when the Jerusalem Church owned the city. A miraculous inauguration. A phenomenal honeymoon period. A period of explosive growth. The Christians of Jerusalem met and worshiped openly in the Temple courts. They were public and bold in their testimony. "They were highly regarded by the people" (Acts 5:13). Peter walked around the city dripping so much spiritual power that even his shadow could heal people of disease.

As a result, people swarmed to the new faith... hundreds of them... thousands!

Ahh, those were the days! Excitement, miracles, and daily conversions. Three thousand baptisms at the end of a single sermon. (And Just As I Am hadn't even been written yet!) These new Christians were filled with a sense of purpose and calling. They were up to their elbows in kingdom business. Tailors, potters, and housewives were transformed into prophets, priests, preachers. It was wonderful! They must have wanted it to last forever!

From "Highly Regarded" to "Most Wanted"

Stephen stood before the Sanhedrin and delivered his bold, risky speech (Acts 7). They killed him for his courage:

At this they covered their ears and, yelling at the top of their voices, they all rushed at him, dragged him out of the city and began to stone him. Meanwhile, the witnesses laid their coats at the feet of a young man named Saul (Acts 7:57-58).

Then Saul started cutting a swathe through the believers — like a scythe through wheat.

On that day a great persecution broke out against the church in Jerusalem, and all except the apostles were scattered throughout Judea and Samaria (Acts 8:1).

Believers were stunned... then afraid. The church went underground. No more meetings in Solomon's Colonnade. No more unguarded witnessing to eager audiences. Persecution drove believers out of the city, scattering thousands of Christians (according to Luke — "all except the Apostles") into safer climes.

A difficult transition by any measure. The Christians of Jerusalem didn't like going from peace to persecution. They weren't excited about being driven from their homes. They didn't enjoy the changes that were thrust upon them.

Yet even in the midst of this rapid and radical transition they managed to keep kingdom business front and center. Even in their fear and uncertainty, they kept being Christ's church. Even as they ran from Jerusalem, they took the gospel with them. And if it meant abandoning their homes and businesses and the city of their fathers, if it meant leaving behind those first heady days of the faith, they would find someplace else — some other way — to keep being the church.

Bringing it Home to Today

Is there anything about the culture around you that stuns you in how the government, culture, and politics deal with issues of faith? Does any of this make you afraid about the future? 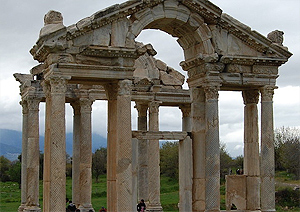 Are the transitions you and your church facing difficult? What aspects of church should change with the times and what should never change?

What can we learn about dealing with transition, change, fear, and uncertainty from the way the early believers dealt with it?

Over the next several weeks, we will be looking at the "ch-ch-ch-changes" that the early church faced and what God's leaders and God's people can learn from those early believers and how they dealt with their changes. We live in an ever-changing world, so dealing with change will be a part of our future, so let's face these changes in ways that honor God and advance the kingdom of God!

"Ch-Ch-Ch-Changes" by Tim Woodroof is licensed under a Creative Commons License. Heartlight encourages you to share this material with others in church bulletins, personal emails, and other non-commercial uses. Please see our Usage Guidelines for more information.