Let There Be Light

How deep is the darkness where you shine your light? 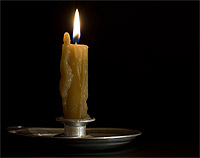 Light has such power.

Just a flicker of light can shine through the deepest darkness and be seen from far distances — the deeper the darkness, the more penetrating and noticeable the light:

A light that thrives in the depths of darkness,
blazes through murky bottoms.
It cannot and will not be quenched (John 1:3 The Voice).

When we pass through a time of deep darkness, we need to remember that the darkness will not last:

Weeping may last through the night,
but joy comes with the morning (Psalm 30:5 NLT).

So let's remember that darkness cannot win. Even just a flicker of light chases the hold of darkness away and gives hope for a new dawn. Jesus is the fulfilled promise of the great prophet Isaiah's vision into God's future when light would drive away the deep darkness that held his people captive:

The people walking in darkness have seen a great light;
on those living in the land of deep darkness a light has dawned (Isaiah 9:2; Luke 1:76-79).

I share this because the darkness has felt heavy some days lately:

Speaking in a congregation several weeks ago, we had a special prayer for a couple who had formerly been members: their son was on flight 370 that disappeared leaving Malaysian air space.

This past week, I learned that several years ago one of my friends had baptized three of the Nigerian girls abducted from school in the ongoing horror for families and friends.

I pray daily in honor of a precious couple who have family, friends, orphans, school children, and a church they work with in Ukraine. They grieve daily for the darkness of brutality, chaos, and loss that has now descended on the poor, the weak, the old, and the marginalized of Ukraine.

These are no longer news headlines, these are people I know, brothers and sisters in Christ, and hearts that are broken and cannot be quickly mended. Such is the thick darkness that often erupts when Satan is still "the ruler of the kingdom of the air, the spirit who is now at work in those who are disobedient" (Ephesians 2:2) and "ruler of this world (John 12:31).

Yet light still shines. We might not know the stories of God's light shining out of these times of deepest darkness. But in one of the worst horrors of this past season, we do know of one incredible story of light that shines out of the hellish darkness that tried to engulf the Passover and Easter season.

When Frazier Glenn Cross, a.k.a. Glenn Miller, allegedly channeled his anti-Semitic rage into a murderous attack on the Jewish Community Center of Greater Kansas City and the nearby Village shalom assisted-living facility, he unwittingly killed followers of Jesus. As he unleashed his hell bent fury on what he thought were Jewish people, he killed Reat Griffin Underwood, a 14 year old Boy Scout and the young man's grandfather, William Corporon, an admired physician. They were at the Community Center to honor the Passover Seder meal, the meal Jesus shared when he joined his closest disciples in the Last Supper. The other victim was Terri LaManno, an occupational therapist visiting her mother in the assisted living center.

The crime was not more senseless because of the error of judgment the murder had of those he murdered. Race hatred is as blind as it is bigoted and any race-based violence depreciates us all, regardless of our race. It dehumanizes what God made holy in the womb and called a person and had a plan for that person to make a difference in the world (Psalm 139:13-16). Ultimately, we all have one Father, the Father who gave up His oldest Son to adopt us all into His forever family.

So in this revisiting of Nazi rage in a mini-holocaust, darkness descended... yet this darkness could not blot out the light. Reat had recently gone to the DMV for a learner's permit as he began to drive under supervision. When it came time to sign his card, Reat made sure that he marked "YES" on the organ donation section of his license. In so doing, in his own way, he followed the Jesus who is our Passover Lamb and in his death, Reat gave up parts of himself so others could live.

A big heart like his could beat in nearly any chest. In life and in death, the boy proved the bigot wrong.

As Jesus put it:

We don't love the darkness of evil, but when we find ourselves in it, we choose to shine.

This is my commandment: Love each other in the same way I have loved you. There is no greater love than to lay down one's life for one's friends (John 15:12-13).

We don't love the darkness of evil, but when we find ourselves in it, we choose to shine.

So we end just as we began.

Light has such power.

Just a flicker of light can shine through the deepest darkness and be seen from far away — the deeper the darkness, the more penetrating and noticeable the light:

A light that thrives in the depths of darkness,
blazes through murky bottoms.
It cannot and will not be quenched (John 1:3 The Voice).

Let there be light!

"Let There Be Light" by Phil Ware is licensed under a Creative Commons License. Heartlight encourages you to share this material with others in church bulletins, personal emails, and other non-commercial uses. Please see our Usage Guidelines for more information.