Who Can We Trust?

In a world of deception, spin, and verbal hedging, is there anyone we can trust? 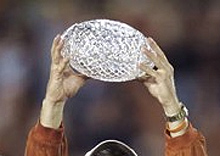 "The thief comes only to steal and kill and destroy; I have come that they may have life, and have it to the full.

"I am the good shepherd; I know my sheep and my sheep know me — just as the Father knows me and I know the Father — and I lay down my life for the sheep"

Rumors circulated for weeks about a well-known college football coach at a prominent university — will he be fired or would he not be fired? As the season ended, he announced his retirement. It was "his decision." 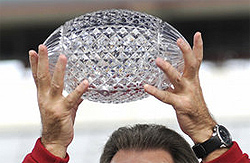 Running hand in hand with that story was the story of another well-known college football coach at a prominent university who might be interested in the previous coach's position and would possibly leave his school for the position held by the other coach. As the season ends, he signs a multi-year deal with a multi-million dollar contract to stay put. He said he had never considered the other position.

A coach at a smaller less-known university signs a contract to coach the team. After one successful season, he breaks his contract, signs a contract with a bigger school for considerably more money.

Athletes go on record as saying they play for the love of the game and that the fans are what it's all about. Then, when a more lucrative offer from another team is offered, they are gone.

Yet those stories are about games and sports. What about "real life"?

A woman stands with a man and pledges that she will love her husband for better or worse, for richer or poorer, for as long as they both shall live. The marriage takes some unexpected turns and is no longer what either of them had anticipated. They agree to file for a divorce because they cannot imagine God wanting them to be so unhappy.

A father tells his daughter that he will love her and protect her — that he would never let anyone hurt her. He abuses her.

A man runs for office promising to lead as a man of the people and as someone who will work for the people. As important and critical bills pass before him, he consistently votes for what seems to profit himself and a few wealthy supporters.

A news media company advertises that "We are the network you can trust." Week after week, they report on stories that turn out to be half-truths, partial-truths, and total fabrications.

A ministry leader stands before his parishioners every week preaching a message of godliness, honesty, purity, selflessness, and dedication to helping the poor, the broken, and the lonely. A story breaks revealing a secret life of greed, immorality, and extravagant living.

These kinds of stories are all too common. Is it any wonder that so many of us are skeptical, cynical and often apathetic?

Who can we trust? Is there anyone who remembers what it means to be loyal, dependable, and a person of his or her word?

There is One we can trust!

The prophets said He would come. He came. He lived among us. He fulfilled their prophecies and promises.

There is One we can trust!
He said He came that we might have life to the full — a truly abundant life. He did and we can.

He said He would teach us how to love, how to serve, and how to live even when He was gone. He did and we can.

He said He would die for us and rise again in three days. He did. He lives. He reigns.

He said He would never leave us. He has not. He never will.

He said He will come again and take us to be with Him forever.

Who can you trust?

Although examples of the untrustworthy are plentiful, not everyone is lying.

Although we will have many who will make promises and not keep those promises, some will keep them. One will always keep them!

Although there are many reasons to become skeptical, cynical, and apathetic, we must not. All we need to do is look at His life and what He did and what He paid to validate His words.

Who can we trust? 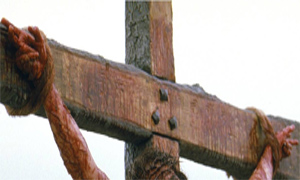 There is One we can trust! We can trust Jesus. His coming, His cross, and His empty tomb are reminders of His truthfulness, His faithfulness, and His love.

Let's trust Him. He keeps His promises. He will do what He says He will do. In a world of lies, half-truths, deception, and playing to the crowd, Jesus remains true to us... to His word... to His Father... and to His promises!

"Don't let your hearts be troubled. Trust in God, and trust also in me. There is more than enough room in my Father's home. If this were not so, would I have told you that I am going to prepare a place for you? When everything is ready, I will come and get you, so that you will always be with me where I am (John 14:1-3 NLT).

"Who Can We Trust?" by Tom Norvell is licensed under a Creative Commons License. Heartlight encourages you to share this material with others in church bulletins, personal emails, and other non-commercial uses. Please see our Usage Guidelines for more information.