WOOHOO! Let's Do this Thing!

Is your life a little short on the adventure scale? Then come along and follow Jesus! 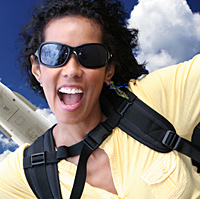 And we know that in all things God works for the good of those who love him, who have been called according to his purpose (Romans 8:28 NIV).

Adventure... — Risk-taking, danger, a bold and wild and exciting undertaking, a rendezvous with the unknown.

"But I'm not the adventurous type" — how often do we hear that?

"Lord, take me away from the monotony of life and give me some adventure!"

Some people flee from it.

Some people are stuck on it.

I may be part of the second group. This had me concerned, so I took a closer look at the word itself.

The root word of adventure is "advent" — meaning the coming or arrival. The root word of venture "vent" meaning to come. The prefix "ad" means to or toward. The suffix "ure" means an act or result.

Either works for me.

The act of going towards something involves some amount of risk — aka, adventure. We hope for a favorable outcome, but we don't really know. That's why when I ask my friend, Beth, what day she's getting home, she says, "Tomorrow. Lord willing." She recognizes that the plane may be delayed or explode en route or some other thing may happen to delay or deter or divert her. There are no guarantees in this world.

The result of moving forward is that we become risk-takers. We experience some amount of adventure. 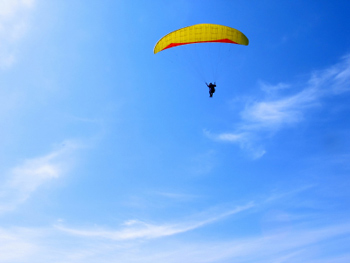 So for all the folks who say they're not adventurous like it's a badge of honor, or all the people who believe their natures are too timid, fearful, and untrusting to participate in adventurous pursuits, I say nonsense! Unless you're reading this from the Lazy Boy in your mother's womb, you are adventurous! You've been moving forward since that first trip down the chute. Not that the cesarean arrivals were exempt from adventure — you were removed up and out.

If you got married, then you are adventurous.

If you had children, then you are adventurous.

If you got out of bed this morning, then you are adventurous.

Life with the Lord really is an adventure!
By now the naysayers are saying: but there's a humongous difference between moving forward after calculated and comprehensive mental thought processes, versus WOO-HOO — let's do this thing!!!!!

Maybe so. Maybe so.

It might be helpful if we look at an adventurous spirit on a continuum. Some are higher functioning adventurers, some are lower.

And though we need some of each in the body of Christ, no matter where we land on the spectrum, we should nurture our adventurous side because heavenly faith demands earthly risk.

Without risk, nothing is accomplished. Everything from greeting a stranger, to helping the homeless, to forgiving your spouse, your friends, your children of their trespasses one more time.

I want to calculate less, and do more, believe more — because more often than not, calculating means looking out for numero uno — me, instead of the other guy. Whatever risks we take, whatever mistakes are made therein, God works these things to our good. 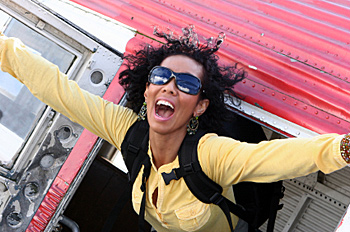 That goodness comes from our faith in Jesus.

Jesus is coming, and He asks us to come along with Him.

Life really is an adventure.

"WOOHOO! Let's Do this Thing!" by Lisa Mikitarian is licensed under a Creative Commons License. Heartlight encourages you to share this material with others in church bulletins, personal emails, and other non-commercial uses. Please see our Usage Guidelines for more information.