We Are really Going Home

Egypt is back in the news, so what does that have to do with going home? 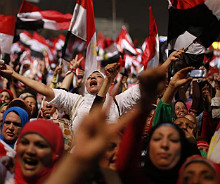 by Phillip Morrison (07/11/2013) | A Taste of Home
The haunting strains of Antonin Dvorak's "Going Home" were played at the funeral of former President Gerald Ford and at the memorial service for Americans killed in Benghazi last year. Astronaut Neil Armstrong took the lyrics with him when he took that one giant leap on to the surface of the moon.

There's no place like our eternal home. Be encouraged by these words!

The little sign in the corner of my TV screen indicated this was a live broadcast, but I wondered. The protesters in Cairo's Tahrir Square look a whole lot like the protesters (estimates as high as 2 million) in Tahrir Square two years ago. Why do I get the feeling I've seen this movie before? With apologies to any Cairenes who may read these words, your home city is out-of-date, up-to-date, backward, modern, noisy, smelly, crowded, and huge. With a metropolitan population of 20 million, it is almost as large as metropolitan New York City.

Of the half dozen visits Mary Margaret and I have made to Cairo, our most recent one twelve years ago is the most memorable. Our tour group had spent two days in Jordan, visiting the remarkable Roman city of Jerash and the incredible fourth century B. C. Nabataean city of Petra, carved out of solid rock. After standing on Mt. Nebo and looking over the Jordan River as Moses had, we crossed into Israel and spent a week following the familiar tourist itinerary. Then, traveling south past the Dead Sea, we crossed into Egypt, visited St. Catherine's Monastery at the foot of Mt. Sinai, then crossed the Suez Canal and made our way to Cairo. After two days, our group divided, with some going up the Nile River to the temples at Abu Simbel and the rest of us preparing for a quick flight to Tel Aviv, an overnight flight to New York, and home for lunch the next day.

While luggage was being loaded on the bus for our trip to the Cairo airport, 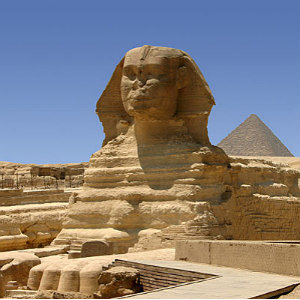 Mary Margaret and I stood, looking through the desert haze to the Pyramids at Giza. As always, we marveled at their immense size, wondered how the ancients could have built such engineering masterpieces, and mostly reflected on their antiquity. When patriarchs like Joseph and Moses were in Egypt, the pyramids had already been standing for a thousand years!

Our reverie was interrupted when a hotel manager pulled me to the side and whispered, "Before you leave, you probably want to watch what's just coming over CNN." I was astounded to see the north tower of the World Trade Center in New York in smoke and flames, and to hear the announcer speculating that a passenger jet had accidentally flown into the building. Then the cameras focused on another plane, bearing down on and smashing into the south tower, and we knew that acts of terror had changed our world forever. It was 4:30 in the afternoon in Cairo, 8:30 in the morning in New York, on September 11, 2001 –- known ever since as 9/11.

As we made our way to the airport, bad news kept coming. A third plane had crashed into the Pentagon, Yet another plane, apparently intended to crash into the U. S. Capitol, had crashed in a Pennsylvania field. All U. S. airports were closed, as were many others around the world.

When our bus stopped in front of our new hotel near the airport, the hotel manager came on board to welcome us and invite us to use the business center to send emails or make complimentary overseas phone calls to our relatives in the U. S. When I asked about a meeting room for devotionals, he said the only room not reserved was the disco, and we were welcome to use it.

"Do you think we can actually make it home?”
So we did, 39 of us meeting for devotionals in the disco morning and evening (we managed to turn off the strobe lights, but never could stop the rotating prism ball). From our friends Leon Sanderson and Randy Gill, we had learned some scriptures set to music. It seemed particularly appropriate for Mary Margaret and me to teach and lead the group in singing "Thou, O Lord, art a shield about me...” (Psalm 3:3) and "As the mountains surround Jerusalem...” (Psalm 125:2). 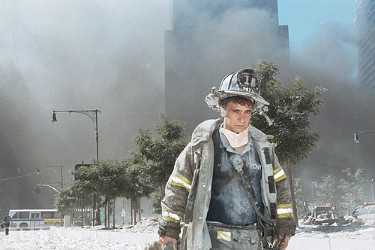 For four days and nights we watched television, though the pictures on all the channels were the same and the languages ranged from Arabic to Hebrew to Italian to German to Polish to English to whatever. In a Swiss hotel, in an Arab, Muslim country, we felt the fellowship of one another and the protective covering of our Father.

When we finally learned we could travel, our most nervous traveler asked me, "Do you think we can actually make it home?”

I took both her hands in mine and said, "Dora, we are going home! And the best thing about being Christians is, if we don't make it home, then we're really going home!"

"We Are really Going Home" by Phillip Morrison is licensed under a Creative Commons License. Heartlight encourages you to share this material with others in church bulletins, personal emails, and other non-commercial uses. Please see our Usage Guidelines for more information.