So why do we discount what the Lord does through us? 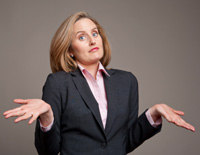 I cannot tell you how many times I've heard these words or words like them. What rips my heart out is that they are often spoke by people who are precious to me and to others in God's family. They do things that are sweet, sacrificial, serving, and tender to people when they need it most. Yet because their acts of service are done quietly or don't seem to be a big deal to them, they think they don't matter that much to God.

Some of the most important people in any story go unnoticed and under-appreciated. Yet these people are vital to the story unfolding in the way it does. Without them, the most important things would never happen. This is true whether the story is a movie or a novel or our own personal story. This is quite often true of God's story in the Bible.

One of the most amazing stories in Scripture is the conversion of Saul. Saul is the fiercest, most passionate persecutor of the early followers of Jesus (Acts 8:3; Acts 9:1-2; Acts 26:10-11; Galatians 1:13; Philippians 3:6). Of all the early problems Jesus' followers had to overcome, Saul was one of the dangerous and troubling ones. Yet in one event, Jesus turns Saul from his biggest problem into his greatest spokesman! While it took fourteen years for all the details to get completely sorted out (Galatians 2:1), the threat of Saul's violent persecutions were immediately solved and he was on his way to being the most influential follower of Jesus to ever live!

However, I'm guessing you can't remember the name of one of the most significant people in the story of Saul's transformation. His name usually escapes most folks' memories. See if you can remember it!

Saul of Tarsus, known later as the apostle Paul (Acts 13:9), was struck blind after an amazing encounter with Jesus on the road from Jerusalem to Damascus (Acts 9:3-9). Jesus tells him to go to the city and he will be told what to do to be saved, given a new life mission, and receive his sight again.

Meanwhile, a well-known follower of Jesus from Damascus is told to find Saul and share the message of Jesus with him. His name is Ananias and he is reluctant to go because he knows Saul's mission in Damascus is to arrest and persecute people like Ananias and their families (Acts 9:15-16). Ananias is assured that Saul is repentant, and has been spending the last three days fasting from food and water, blindly praying for God's messenger to come share what he needed to do (Acts 22:10). So that is what Ananias does. He risks his life and safety to share Jesus, baptize Saul, and help Saul regain his sight (Acts 22:14-16).

So who is the unknown and important player in this story? The man who opened his house for the blinded Saul to wait, pray and fast! The man who was greeted at the door by Jewish Temple soldiers and a blind Jewish man looking for a place to stay in Damascus, Syria! The man who welcomed Ananias, a Christian who was targeted for persecution, into his home to speak with Saul and then lead him to Christ. Without this man's hospitality, none of this would have happened in the beautiful way that it occurred.

And the man's name? Do you remember?

His name is Judas. Yeah, it is not a name we remember with fondness because of the other Judas. Only a few people to whom I've posed this question actually remembered his name. Luke describes it this way:

In Damascus there was a disciple named Ananias. The Lord called to him in a vision, "Ananias!""Yes, Lord," he answered.The Lord told him, "Go to the house of Judas on Straight Street and ask for a man from Tarsus named Saul, for he is praying" (Acts 9:10-11 NIV).

Anything we do, when it's offered to the Lord and done for his glory, will be used to grow God's Kingdom and bless God's people.
And here is the point I want us to get. Many of us feel that our lives don't make that big of a difference in the grand scheme of things. We are not sure we are doing anything great for God. We compare ourselves to the great Bible heroes like Moses and Esther, Mary and Peter, Joshua and Deborah. We don't consider our lives as any great contribution to the work of God.

One of the reasons we do this is because we forget how important other people are to the life of someone great. Without all these other folks, their lives wouldn't have been nearly so influential. For example, where would the apostle Paul have been if Judas hadn't welcomed him into his home and then received Ananias into his home to lead him to Jesus? There are many others in Paul's life that had a dramatic influence on him and enabled him to do the great things he accomplished for the Lord.* Without them, not only would Paul's life have been greatly diminished, but Paul's work for God would have come up far short of what God had intended for him.

So rather than discount your work for the Lord, remember that anything we do, when it's offered to the Lord and done for his glory, will be used to grow God's Kingdom and bless God's people. That's why the smallest things, even a cup of cool water given in the Lord's name, is not forgotten and not wasted! And most important of all, even if no one remembers what you did and can't even remember your name, there is One who remembers and will not forget!

God doesn't require attention-getting devices. He won't overlook what you are doing; he'll reward you well (Matthew 6:18 MSG).God doesn't miss anything. He knows perfectly well all the love you've shown him by helping needy Christians, and that you keep at it (Hebrews 6:10 MSG).

Just off the top of my head I can think of...

And on and on the list could go. In fact, if you look at the beginning and ending of Paul's letters, you will find dozens of people who blessed and influenced and enabled his ministry. Without them, his life and his ministry would have not accomplished all that God used Paul to accomplish!

"Nothing Significant?" by Phil Ware is licensed under a Creative Commons License. Heartlight encourages you to share this material with others in church bulletins, personal emails, and other non-commercial uses. Please see our Usage Guidelines for more information.