Sometimes it take the unbelievable to shake up a believer. 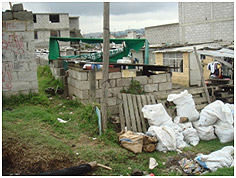 The poverty in his neighborhood was so overwhelming that I was completely broken; little Edison was only 18 months old but was facing seemingly insurmountable odds.

The only solace I had when we departed was that Edison was part of a relatively new program from Compassion International called the Child Survivor Program (CSP).  I saw first-hand the impact this program was having on him and his mother by educating them in areas such as hygiene, nutrition, and many other developmental skills.  As the father of a boy the same age as Edison, I knew how important this program was to his development as well as the support it provided for his mother.  Still, his situation was bleak and walking in his shoes for just a little while forever changed me.  We left Ecuador the next day, but Edison remained in my heart for many months after I returned home.

This past fall, Compassion International’s "mobile experience" came to my city.  We took our children to see it — an interactive traveling display that gives a glimpse into the lives of children living in poverty.  With renewed conviction we came home with plans to sponsor a boy from Ecuador who was the same age as my son.  So we visited Compassion’s website, chose that country, and looked for boys ages 3-5.  There was only one child who matched the search: His name? Edison Ivan! 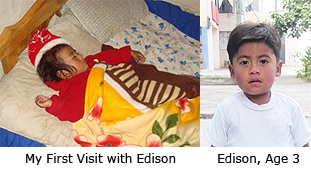 My wife and I couldn’t believe it — in fact, we didn’t believe it.  Of all the kids (there are 1,000,000+ sponsored children) in the world, it just couldn’t be him! But after reviewing some photos and videos from my trip to his house, it became clear that the boy that had moved me to tears had done it again. Edison was a needle in the haystack of poverty, but God saw fit to lead me to him not once--but twice. I had been reunited with Edison and had learned that he was doing well. Now I am able to write him letters and have received drawings from him and notes from his tutor.  It is such a privilege to participate in a material, emotional and spiritual way as he grows in the Lord.

I realize most people who sponsor a child through Compassion will never have an experience like this.  Most sponsors never meet the children they sponsor.  But faithfully sponsoring a child you’ll never meet has an incredible impact for the kingdom of God. The older sponsored children I have spoken with frequently say they are awestruck that someone in another country would love them without ever meeting them. Sponsors who love these children because Christ first loved them are doing more than they could ever imagine to share Jesus with the world.

Will you prayerfully consider sponsoring a child through Compassion?  There are many more boys and girls like Edison who are longing for someone to sponsor them.   You can learn more about the program by visiting Compassion International's website or emailing me.

"Reunited" by Ben Steed is licensed under a Creative Commons License. Heartlight encourages you to share this material with others in church bulletins, personal emails, and other non-commercial uses. Please see our Usage Guidelines for more information.