The Work of My Father

What is my Father trying to teach me about his work? 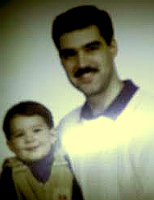 I listened as a gifted speaker* told a story of when she was a young child. Her grandfather would wake her up early in the morning and she would hang on his back, "helping" him as he went along his morning routine. She'd pull the newspaper from the mailbox, pour his cereal, and lather up his face with shave cream before he delivered her back to her bed. There she would ponder: how does he make it when I'm not visiting?

But the truth was, he didn't need her help. It was because he loved her that he included her and used her help.

And God doesn't need our help concerning His creation, either. He gives us the privilege of working with Him until all has been accomplished. God does this, because He loves us.

And that makes me ponder: How interested am I in my Father's work?

When our son was about a year and a half old, he came and asked for the "skoodiver" and "mammer": for some reason I gave them to him. Then, the phone rang and I became distracted. The next thing I heard was the hammer hammering the screwdriver into the ceramic tile his father, Sam, had laid the day before on the bathroom floor.

Was Sam mad? (Well, not with Spencer.) No, Sam was pretty puffed up with pride. His son was interested in his work — meaning not just this specific job, but what he saw his daddy doing with his hands and heart.

Again, I ask, how interested am I in my Father's work?

There's been a fundamental shift in my country that's indicative of something bigger than democrats versus republicans, and it feels foreboding. I'm working my way around this shift in the manner of the proverbial blind men with the elephant, trying to figure out what the individual parts are and what they mean.

And with this shift, I'm sensing that my interest in my Father's work is changing, too.

I am to be the salt of the earth — Jesus tells me in The Sermon on the Mount. I am to be the light of the world. In the past, I felt my work was to be salt and light. For me, that always meant a softer approach to people to not risk putting them off with any hard truth. But as far as voicing some of the deeper aspects of my beliefs, I've been like a faith whisperer. Maybe the dog could hear me, but no one else.

I told myself a softer voice would be more effective in communicating. Lately, however, the suspicion has been growing that I've been afraid, too. And being afraid, I've been reticent in the expression of my faith and my thought to put myself unequivocally out there for Jesus — for who he is and what he stands for.

I'm trusting if I wake up and show up that God will clue me in!
Through the years, our son has had stretches of reticence to be involved in his dad's work, too. During the last stretch, I asked Sam about it. Did he feel disappointed? He said he was not really disappointed. He knew that there would be a season coming when Spencer would have a family and suddenly he'd be real interested in learning about building, maintaining, and plumbing — especially plumbing.

Maybe that's what's happening to me — the seasons are changing, and I feel the need to know more and participate more in my Father's work. It's beginning to feel urgent.

Of course, God doesn't NEED my hands or feet or voice to accomplish what He's going to accomplish. But God does delight in me wanting to be a apart of His work. So in His perfect timing, I'm hoping he won't mind me stumbling along, slowing things down, getting it wrong nine times before I get it right once. Fortunately, for me, and the rest of the world, God's plans don't hinge on my aptitude or ineptitude.

I realize whatever I do, I will not stop the shifting tide of our culture's drift from God, but I also realize that there are yet unreached hearts that are inclined to hear and feel and respond. So I will be blessed to feel the early-morning tap of my Father's finger on my shoulder inviting me to "help" Him.

I don't know yet what this work will look like — I'm trusting if I wake up and show up that God will clue me in as to what I should be doing and how to do it, and that He'll give me the right tools. And I also know the Father will put me on His shoulders and get me to the places I can help accomplish His work.

And when my spirit feels low in mourning for some of what has been lost in the shifting world, I'll pray that the closeness I'm cultivating with my Father will bring me courage and peace — courage to do the work the Father invites me to share and peace to rest in the Lord's grace when the day is done.

* The name of this speaker is Paige Benton Brown.

"The Work of My Father" by Lisa Mikitarian is licensed under a Creative Commons License. Heartlight encourages you to share this material with others in church bulletins, personal emails, and other non-commercial uses. Please see our Usage Guidelines for more information.

Stooping to Serve, Not to Shame
God brings me to my knees, both in honesty and in choosing joy, as I pick up a careless mess made by the precious, but oblivious little stampede that lives within my walls.

Run Away Like Jonah Days
Perhaps the biggest gift of