Haven't you stayed down long enough? 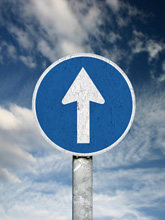 by Rick Brown (07/27/2012) | Special Features
"Do you want to be made well?" (John 5:6). That may be the strangest question ever asked a lame man. For thirty-eight years he had not been able to walk. If he wanted to get out of bed, someone had to help him. If he needed to relieve himself, a friend—a close friend—had to give him aid. If his pantry was bare he had to have someone either take him to the store or go for him. If he was invited to a party and his friends said they'd stop by and give him a lift... they meant it. Literally.

He had some hope that his life could change. There was a story that had gone around for years that, from time to time, an angel of the Lord would come down and stir the water in the Bethesda pool, and whoever stepped in first after the stirring would be healed of their affliction.

And so one day he is by the Bethesda pool. Others are there too. The whole lot of them is just called "needy." That was their story. That was his story. He could not walk but he definitely could talk. He would tell everyone who would listen how hard his life had been and how the world was not fair and...

Well, you know how that story goes, don't you? Probably because you have one yourself. And it probably follows a typical story line. You are who you are because of the somethings or someones that have shaped you. You tell how your life is not as it should be because of certain things that have happened in your life in which you were a victim. And you go on to say that some day it will get better if or when something rescues you from your current situation.

Sometimes it's easy to blame other people or other circumstances for the place we are in life. When we do, we become one of the needy. Until Jesus shows up and asks "Do you want to be made well?"

It's a strange question, but the answer Jesus gets may be even stranger:

"Sir, I have no one to put me into the pool when the water is stirred up, and while I am going another steps down before me" (John 5:7).

Did you hear what he said?

"I have no one to put me into the pool."

"Another steps down before me."

A simple "yes" would have sufficed. Instead, he told his story. Jesus had a better idea. A bigger idea. He looked at the man and said, "Get up, take up your bed, and walk" (John 5:8). Three quick commands.

Are you tired of lame excuses?
"Walk!"

"Get up" is a word used to describe someone who is aroused from the sleep of death. Have you ever been there? You are stuck. Lame. Unable to move because of where life has brought you or what it has done to you? And you want to tell that story. But Jesus says to "get up."

And then "take up." We have to carry our own stuff. There are times when we help each other out. But there are times we just have to take care of our own life. We can't put it on someone else. We can't blame others or wallow in our own self-pity. Not if we want to take responsibility for our lives.

That's why Jesus asked the man if he wanted to be healed. He needed to think about it carefully. If he suddenly could walk then his story would have to change. He could no longer blame the one who wasn't there to put him in the water or the one who got in ahead of him. He'd have to give up his routine and throw away his money cup. He'd have to find a job and pay his own bills and carry his own load.

And then he'd have to "walk." Jesus used a tense that means, "Walk and keep walking." The word "walk" in the Bible often carries with it more than just the act of walking. It has to do with how we live our lives. Jesus is telling him to get up and take up responsibility for his life and keep walking that way.

Are you tired of lame excuses? Then get up, take up, and walk. You'll tell a better story. And like the lame man, when your story changes, so does your future.

"Up!" by Rick Brown is licensed under a Creative Commons License. Heartlight encourages you to share this material with others in church bulletins, personal emails, and other non-commercial uses. Please see our Usage Guidelines for more information.

up get up take up walk live responsibility value goodness in life.