God spoke His greatest message with just one Word! 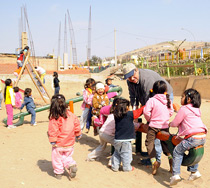 by Phil Ware (02/05/2012) | Two Minute Meditations
We were tired — exhausted would be the more accurate description. We had just returned from a week of working with about 100 volunteer workers and 30 translators in a Peruvian orphanage. Many of us had come back a little sick. All of us had spent a great deal of our own money to go and many had received additional funds from their churches, friends, and families so they could go.

I was a bit taken aback when a person came up and said, "I don't mean to be uncaring, but wouldn't it have been better to simply have collected all the money you spent and given it to the needs of the orphanage? Seems like that would have done more good."

The person wasn't being rude. He was raising an important question. In fact, it was a question posed by two others in emails. I'm not sure I answered them at that time in the best possible way. I believe I said something like this:

Yes, it was very expensive. But you see, we've generated far more money with social media, reporting to our churches, getting people involved in the project, giving ourselves, getting our translators involved in the needs of the orphanage, and getting Peruvian businesses involved than we ever could have accomplished if we had never gone.

These are reasonable answers. They are significant. They are factual. The 950 plus children in The Community have gone from less than one meal per day to three since we began our trips. Conditions have dramatically improved with sidewalks, better cooking and kitchen resources, cleaner water, better kept houses for the children, more going to college when they finish, and new buildings being built. But this is not the primary reason we go.

Probably the most famous verses in the Bible are the following:

For God so loved the world that he gave his one and only Son, that whoever believes in him shall not perish but have eternal life. For God did not send his Son into the world to condemn the world, but to save the world through him (John 3:16-17 NIV).

For God so loved the world that he did NOT send ... money, a book, a philosophy, a new idea, or even a religion. God loved us so much that he gave by sending us his Son.

We needed more than words: we needed the Word of God in human skin (John 1:1-18). In other words, God spoke his most powerful, most complete, and most important message through his Son (Hebrews 1:1-3).

And when Jesus finished his time on earth he said to his followers:

The Lord wants us to live our lives out of the same purpose he had in coming to us: we are sent out to the people in our world so that they know that God loves them.

While I believe we must evaluate the effectiveness of what we do and why we do it, we must also realize that not all measures of success and failure fit into our nicely constructed categories. Even if our efforts to bless the children of Sagrada Familia didn't come out to such a clear measure of success, there is still the example of God that we are called to follow. We go because he came. We send because he sent. We love because he first loved us.

When asked, "Why do you go?" recently at a meeting about this year's Peru trip, all the answers were precious, but two answers brought tears to my eyes.

The first answer is a sentiment shared by several people who spoke:

For one week, I can give these children total attention. I can kiss their hurts. I can give them hugs. I can wipe away their tears. I can share their laughter. Without parents, no matter how hard the staff works and how much the helpers do, these children don't have this. They need to know they are loved up close. And that is why I go.

Why do we go?
The second answer comes from a young woman who is simply precious. She and her husband were great with these orphan children. But in the subsequent months, discovered that their third child she was carrying would not live long after birth. As you would expect, they have lived a hard journey the last several months, but they have done so with grace and faith. This young mother's answer says it all:

Why do we go? Because God chose to leave heaven and come to us. Words — even divinely inspired words — were not enough. God knew we needed words with skin on them: we needed him. So he came to us in Jesus, lived among us, and showed us who he really is and how much he loves us.

In the beginning was the Word, and the Word was with God, and the Word was God. He was with God in the beginning. Through him all things were made; without him nothing was made that has been made (John 1:1-3). ... The Word became flesh and made his dwelling among us. We have seen his glory, the glory of the one and only Son, who came from the Father, full of grace and truth (John 1:14). ... No one has ever seen God, but the one and only Son, who is himself God and is in closest relationship with the Father, has made him known (John 1:18).

For more on the trips to Sagrada Familia follow this link:
http://www.heartlight.org/thephilfiles/?s=Sagrada+Familia

"More than Words" by Phil Ware is licensed under a Creative Commons License. Heartlight encourages you to share this material with others in church bulletins, personal emails, and other non-commercial uses. Please see our Usage Guidelines for more information.