Our Failure to See God

How could this happen? 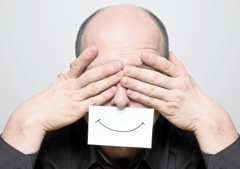 by Rubel Shelly (07/05/2011) | Leading in Hope
There are countless situations in the Four Gospels that amaze me. People sat in synagogue with Jesus, ate food he created by the baskets full from a boy's sack lunch, and saw him heal people who had been blind from birth. Then those same people either said he was crazy or that he must be demon-possessed.

He made outrageous claims that would have indicated mental illness — apart from proof consistent with the claim. He also went to enough unsavory places and spent time with sufficient less-than-respectable people that you could have believed he was possessed by a devil — unless you take into account that every one of those people and places was changed for the better by his being there.

This is the same sort of reasoning Jesus himself used with people. For example, he put this question to a group of people hostile toward him: "Why do you call it blasphemy when I say, 'I am the Son of God'?" (John 10:36 NLT).

Don't get the wrong idea from his question. He never once asked anyone to believe his shocking claim to be God on a rescue mission to Planet Earth simply because he made the claim. He always and only asked for belief on the basis of good evidence. "Don't believe me unless I carry out my Father's work," he told them. "But if I do his work, believe in the evidence of the miraculous works I have done, even if you don't believe me" (John 10:37-38 NLT).

Do you hear his logic? Do you get the point? There are two things that should have confirmed his identity to them:

Doing the loving, life-redeeming, forever-transforming things of his Father in the lives of people.Performing the miraculous acts of healing and other wondrous deeds for which we know him.

Here are some of the things that counted against Jesus' claims and kept people from faith:

Things haven't changed a lot. It's still easy to miss God — to be blind to his presence, deaf to his voice, and oblivious to him when he tries to reveal himself. And what could be so powerfully blinding, deafening, and desensitizing that it could have that effect? The trivial and petty squabbles of our religious traditions.

Things haven't changed a lot. It's still easy to miss God!
Atheism is dead wrong as to its claims, but its honest forms are likely more palatable to God than many of the things we know as religion.

Jesus replied, "You hypocrites! Isaiah was right when he prophesied about you, for he wrote, 'These people honor me with their lips, but their hearts are far from me'" (Mark 7:6 NLT).

"Our Failure to See God" by Rubel Shelly is licensed under a Creative Commons License. Heartlight encourages you to share this material with others in church bulletins, personal emails, and other non-commercial uses. Please see our Usage Guidelines for more information.