How can any marriage survive this? 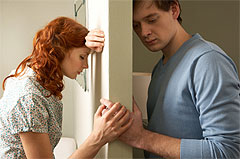 by Joe Beam (05/24/2011) | Together in His Grace
"She's pregnant by her lover. But she says she has come to her senses, loves me, and wants to save our marriage. My family practically hates her and wants me to divorce her and have nothing else to do with her ever. I don't know what to do."

Call him Jim. Call her May. Every year situations such as theirs are repeated more times than one might imagine. One person does wrong, consequences arise, penitence hits, and the straying spouse begs for forgiveness and reconciliation.

Jim's case illustrates a pinnacle of marriage problems; May is carrying her paramour's baby. If Jim takes her back, what happens to the baby? Do they keep him? Do they put him up for adoption? In a stressful time like this they might even ask if May aborts? Do they give him to his biological father?

Tough questions, but essential if they consider reconciliation because May is pregnant. Weeping, worrying, or wanting things to be the way they used to be does not change that.

Whether that person actually leaves depends on many factors including religious beliefs, cultural expectations, the depth of hurt, influence from family or friends, how close they were before the occurrence, alternatives for the future, repetitiveness of hurtful behavior, and more. For example, a woman may stay with her physically abusive husband because her religious beliefs are that she can divorce him only if he commits adultery. On the other hand, another woman may discover her husband's one-night-stand more than twenty years ago and decide the pain is so strong that she cannot live with him again.

Deciding whether to forgive and reconcile, or to end a relationship and move on, often is not an easy decision to make. However, there are certain things to consider that may help in making the best decision.

Be Careful Who You Listen To

When one is hurt, taking advice from friends and family may be the least wise thing to do. Typically, people who care deeply feel personal hurt by what someone has done to the person they love. They tend not to think in terms of forgiveness and reconciliation but in terms of punishment and alienation. In short, rather than being objective, they may be anything but. Wiser counsel typically comes from those who are not directly involved. Even better, listen to third parties who are skilled and experienced in working with people and know something about relationships (like us).

Decide Whether It Is Safe

Reconciliation leads to more hurt if proper boundaries are not put into place. When deciding whether to take back a person asking for forgiveness and requesting a second chance, consider all factors of safety. Emotional. Physical. Mental. Spiritual. Think not only in terms of self but also in terms of others involved such as children. If safety is in doubt, do not reconcile until all doubts have been dealt with properly.

Before reconciling, do a cost-benefit analysis. On paper, write the costs of reconciliation and the benefits of reconciliation. Be honest with yourself. Consider financial aspects, potential lifestyle changes, likelihood of the future truly being better or worse based on whether you reconcile or not, possible aloneness, and more. Do not make this list while struggling with any confusing emotion, whether anger, love, or despair. If wise and unprejudiced counsel is available, have someone work through the list with you.

In the case of Jim and May, Jim determined that the costs of taking May back were not as high as the costs of losing her. While some in his life ridiculed his decision, he had taken time to deliberate and consider many aspects of their relationship and the future they could have. Years later, he is happy with his decision and feels that the benefits indeed were much better than the emotional costs.

If one is to forgive and reconcile, there must be solid understandings of behavior that is acceptable and behavior that is not. There should be consequences tied to negative behaviors. For example, if a man reconciles with his alcoholic wife, they would do better to have a written agreement as to consequences that would come into being if she were to get drunk. When those type contracts are made and agreed to, there must be NO mercy or grace offered. Make the consequences more intense with succeeding infractions, culminating with a final doomsday scenario. That means an end to the relationship. Struggling or straying spouses need to know they cannot continue bad behavior indefinitely.

Forgiving and reconciling are not enough. Even boundaries are not enough. To keep the relationship from falling into old routines, there must be a plan to make it grow and develop into a better one than it was. There are many ways to do that, including many marriage books, courses, workshops, and the like. Being involved with a good marriage group can help.

We would be happy to help.

By the way, Jim and May kept the baby. He is about ten now. He and his siblings and parents are doing great.

"Reconcile or Run?" by Joe Beam is licensed under a Creative Commons License. Heartlight encourages you to share this material with others in church bulletins, personal emails, and other non-commercial uses. Please see our Usage Guidelines for more information.