Who really is the best of all of time? 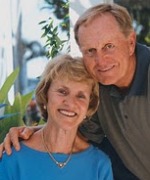 by Phil Ware (03/25/2011) | Two Minute Meditations
Nearly fifteen years ago, I wrote this short little article. To be honest, I thought Tiger Woods would have eclipsed all of Jack Nicklaus' on-the-course records by now, but even Tiger has learned that a private lack of character can crumble a public persona and block ones ability to perform publicly.

As we near another Master's invitational golf tournament and as the weather warms and those who love golf hit the links, I felt it would be good to remind us all of something very important that the greatest golfer of all time has taught us and what an incredible record he has left behind!

Jack Nicklaus has rewritten the record books in professional golf. His record is without rival. To mark the end of his career in the U.S. Open, the associated press ran a feature listing Nicklaus' accomplishments:

In an age of disposable partners, this may be the biggest accomplishment of all. Here is a man who excelled in his field without rival or compare. With dignity, style, and faithfulness he has rewritten the record books. Despite the travel and the temptations that come with money, success, and power, there was never a doubt about Jack Nicklaus' love for his family and his wife.

In an era of high profile athletes who abuse their spouses, have trouble with drugs, leave behind children without a father, and who abandon their families to pursue their careers, it's nice to know that the greatest of all time in this arena of life has as his number one accomplishment his lifetime commitment to his wife.

Courage is not displayed in the fleeting moments of fading glory in athletic pursuits while under pressure — many are born and others have learned to perform under pressure. But real courage is displayed in the consistent care and faithfulness to people we have promised to love, honor and cherish. Achievements are temporary, people are forever. So in our pursuit of fame, fortune and glory, let's make sure that we have as our number one goal faithfulness to our family and our promises to them.

Years ago God spoke through his prophet these words:

Let's make a commitment to the real number 1!

You weep and wail because God no longer pays attention to you ... You ask, "Why?" It is because the Lord is acting as the witness between you and the wife of your youth, because you have broken faith with her, though she is your partner, the wife of your marriage covenant (Malachi 2:13-14).

Let's make a commitment to the real number 1:

"Number 1" by Phil Ware is licensed under a Creative Commons License. Heartlight encourages you to share this material with others in church bulletins, personal emails, and other non-commercial uses. Please see our Usage Guidelines for more information.