How do you get life that is truly life? 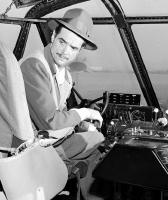 by Tim Archer (07/14/2010) | Hope for Life
If we read about the first part of Howard Hughes' life, it's hard not to envy the man. In 1966, he was named the richest person in the world. His fortune is estimated to have been worth more than $40 billion in today's dollars.

On a trip to Las Vegas, Hughes had a disagreement with the owner of one casino. His answer? He bought the casino and several around it. Money was his answer for everything.

In his prime, Hughes was a daring aviator and tireless tinkerer who spurred science to new heights. He was an industrialist, entrepreneur, and world record setter. His wooden plane, the Spruce Goose, was the largest amphibious plane ever built, and was taller and wider than any aircraft in history.

Surely this was a man who had it all. Despite all of that, Hughes lived his last twenty years in reclusion. He refused to appear in public or to be photographed. He became an extreme hypochondriac, with an unnatural fear of germs. He was only seen by his doctors and his personal servants. He refused to cut his hair, his beard or his nails.

It was a miserable life. When he died, he was a wretched skeleton of a man, who died outside the presence of family or friends.

Money is not the answer to everything. It can't purchase happiness. It can't bring us peace. It can't even prolong our lives.

Jesus said, "But store up for yourselves treasures in heaven, where moth and rust do not destroy, and where thieves do not break in and steal. For where your treasure is, there your heart will be also" (Matthew 6:20-21).

The apostle Paul said something similar when he wrote:

Command them to do good, to be rich in good deeds, and to be generous and willing to share. In this way they will lay up treasure for themselves as a firm foundation for the coming age, so that they may take hold of the life that is truly life (1 Timothy 6:18-19).

Let me tell you about it. Write to me at tarcher@heraldoftruth.org or join the conversation at HopeForLife.org.

"Treasure Keeping" by Tim Archer is licensed under a Creative Commons License. Heartlight encourages you to share this material with others in church bulletins, personal emails, and other non-commercial uses. Please see our Usage Guidelines for more information.