Are you just circling? 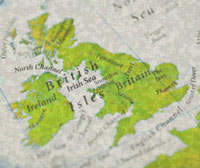 This is what the LORD says — your Redeemer, the Holy One of Israel: "I am the LORD your God, who teaches you what is best for you, who directs you in the way you should go (Isaiah 48:17 TNIV).

[Jesus said] "I am the way and the truth and the life. No one comes to the Father except through me" (John 14:6 TNIV).

An unnamed man in England was rescued in a small motorboat off the southern coast of England last month.

Rescued from his own lack of judgment, as much as anything.

The man was trying to sail from the London suburb of Gillingham to Southampton on April 19th when he got a little turned around. Rescue personnel found him, with his boat out of gas, floating near the island of Sheppey, near the mouth of the Thames River. He told his rescuers that he had been trying to navigate by keeping the coastline to his right, but had ended up simply circling the 36-square mile island instead.

He might still be circling if he'd had more fuel on board.

Something tells me that this lost traveler didn't have a lot of experience in boating. But lack of experience didn't seem to be his only problem. His rescuers discovered that he had no navigational instruments on board, and only one map.

A road map of southern England. No wonder he had trouble. He hadn't been that way before, and he didn't have a reliable guide for the journey.

He's not the only one, is he? Life can be a confusing journey, full of turns we don't expect and choices we don't have the resources to make. It seems simple enough — get from Point A to Point B as safely as you can. So we get our bearings and launch out, confident in our ability to navigate the journey.

But what if the landmarks by which we're navigating are the wrong ones? We wind up going in circles. Or worse.

Know that there is hope!
It's easier than it sounds to navigate by the wrong landmarks. All it takes is to misread just one. Miss just one, and you can find yourself traveling a route you never intended toward a destination you never wanted. Backtrack through the lives of most of the prison population in America, for instance, and it won't take you long to find missed landmarks. Bad decisions, their own and others', that led to other bad decisions, and then to others. If a person should have gone this way at a key moment in her life, and turned the other way, how does that affect the rest of the journey? Often, deeply and profoundly.

I know, I know. We all miss landmarks from time to time. What's critical is not so much the missing of it, but whether or not you realize it, and how soon, and what you do next. Some wrong turns can be corrected. Others, you just have to recover from. As long as you can see that you've made a wrong turn and are willing to admit it and correct it, most of them aren't fatal. It's the ones compounded by ignorance, rationalization, or pride that'll sink you.

We have a God, the prophet says, who loves us enough to show us the way we should travel. God doesn't intend that life should be so complicated that we get lost. He wants us to trust him, to believe that he knows the way and navigate by the landmarks he shows us. Love for him. Gratitude. Justice. Concern for those around us. Honesty. Morality. Worship. Sacrifice. Generosity. Responsibility. These are the signposts, the landmarks that guide us. It's always right to choose generosity over selfishness, honesty over lying. It's always right to be thankful, to obey God, to help the marginalized. These landmarks guide the turns we make, inform our decisions and choices. And when we realize we've missed one, they guide us back to the route we're supposed to be traveling.

But we still get lost, and so God chose to intervene in our journey directly. "I am the way," Jesus claimed. Not the teaching he brought, or even the example he lived. God came in Christ to show us the way to him, walk the journey ahead of us and clear up any confusion about the destination. And when we find the journey too difficult or too complicated, the way too obstructed, the side trails too tempting, he's there to patiently call us back to him. "I am the way," he reminds us. And suddenly the path becomes clearer and the journey makes so much more sense.

He gives us the Holy Spirit, a sort of spiritual GPS who reminds us of the journey we're on and helps us with the turn-by-turn directions. And he places us in a community with other travelers along the same path, so that none of us have to make the trip alone. And through Scripture he expands our circle of acquaintances to include other men and women who have lived the same journey ahead of us, and the men and women who have been touched and moved and challenged and inspired by them.

Two points, then. First, if you find yourself off track and lost, know that there's hope. You go back to God. You do what you do when you get lost on any trip: go back to the last landmark and start again. Tell him you're lost, and ask him for help. Listen to his Spirit. Listen to his people. Listen to his word. Put your trust in Jesus, and you'll find that whenever you're at a loss the right direction is always toward him.

And second, if you're not lost, know that you're a rescuer. There are so many people around you who are lost, and many of them aren't hopeful that they'll ever find their way. But you know the way. Not because you're so much smarter, or have figured out the mysteries of the universe, or because you never get turned around yourself from time to time. But you know Jesus, and so you know the way. Invest some time and energy, then. Come along someone who's adrift and show them the way. Invite them to come with you, and bring them to him.

He'll keep them from turning in circles and get them home.

"The Way" by Patrick D. Odum is licensed under a Creative Commons License. Heartlight encourages you to share this material with others in church bulletins, personal emails, and other non-commercial uses. Please see our Usage Guidelines for more information.