Why in the world would someone do this? 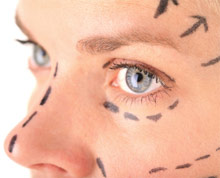 No longer will they call you Deserted,
or name your land Desolate.
But you will be called Hephzibah ["My Delight is in Her"],
and your land Beulah ["Married"];
for the LORD will take delight in you,
and your land will be married.
As a young man marries a young woman,
so will your Builder marry you;
as a bridegroom rejoices over his bride,
so will your God rejoice over you (Isaiah 62:4-5 TNIV).

A 21-year-old woman in Shanghai has made news this week for deciding that her best chance to win back her ex-boyfriend is to be someone else. Or at least to look like someone else.

The young woman has made the decision to have multiple plastic surgeries designed to make her look like actress Jessica Alba. It seems that throughout their year and a half relationship, her boyfriend has been obsessed with the actress. He hung pictures of Alba all over the apartment the two shared and talked about her constantly. He even bought his girlfriend a blonde wig to wear, though she says he never came out and told her that he wanted her to look more like Alba.

Well, no. Because that would be creepy.

The young woman actually showed quite a lot of sense when she broke up with the guy over his obsession. Now, though, she says she misses him and wants him back. "My friends ... suggested I do plastic surgery to look like her," she told reporters at a Plastic Surgery Hospital in Shanghai. The hospital has agreed to do the multiple surgeries that will be necessary without charge, "to showcase their surgery skills."
(See the story: http://www.reuters.com/article/idUSTRE6134TQ20100204)

In fairness, the director of the hospital has encouraged the young woman to think seriously about the procedure, but she seems to think there's something empowering in it. "As a member of the younger generation in this country," she says, "I have a choice to decide what I want in life."

That's true, I suppose. It's just sad that what she thinks she wants is to be someone else.

Name something about yourself or your life, and there's probably someone somewhere who will sell you something "guaranteed" to make it better. Or a fantasy to make you forget that it isn't better. Advertising depends on it. Political campaigns stand or fall on it. The credit industry relies on it. Retailers cash in on it. Drugs and alcohol and pornography thrive on it.

To quote singer/songwriter Steve Earle: "It's called snake oil, y'all; it's been around for a long, long time."

That would be creepy!
Sometimes the church, intentionally or otherwise, communicates a picture of God as vengeful, judgmental, and stern. That's the danger in trying to take seriously God's holiness, and the high purpose to which he calls his people. It can almost sound, sometimes, as if we're just proclaiming another way in which people aren't good enough — that they need spiritual plastic surgery in order for God to love them.

But look again. Listen again. The Bible is full of passages like the one in Isaiah that affirms God's "delight" in the people that he made, and his determination to live in happiness with them "as a bridegroom rejoices over his bride." Don't read that as some kind of mushy, vapid, puffy romance-novel love. God knows full well what it will take to have that kind of relationship with human beings. He knows that we aren't movie-star material, spiritually speaking. He knows our sin, and has always known the price forgiveness and grace would demand. And he paid that price on a cross in the Middle East, two thousand years ago. Paid it for everyone who lived before, and everyone who will ever live since. And in paying it, he spoke one message, clearly and plainly: you and I matter to him. We don't have to be different to earn his love. He values and appreciates us as we are, spiritual warts and blemishes and all. He delights in us, rejoices over us, and chooses to live with us and call us his.

But if you pass it on, make sure you reinforce it with your actions. Because telling them that God loves them and accepts them just as they are means that you have to, as well. Why would they believe it otherwise? But if you show them that you love and value them, then they might just start to believe it when you tell them that God does, too.

Oh, and please — pass it on to the person in the mirror from time to time. Because we all have days when we have a hard time believing in our worth. And we all need reminding from time to time that there's no way that God can love us anymore than he already does.

Consider this your reminder.

"Delight" by Patrick D. Odum is licensed under a Creative Commons License. Heartlight encourages you to share this material with others in church bulletins, personal emails, and other non-commercial uses. Please see our Usage Guidelines for more information.