What are you seeing as you go to church this morning? 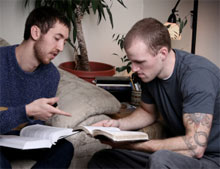 by Tom Norvell (02/21/2010) | Special Features
One of the concerns Jesus expressed during His earthly ministry involved in seeing and hearing. He spoke on more than one occasion about having ears to hear and hearing correctly and about overcoming our spiritual blindness. In one particularly heated discussion on the correct understanding of who He was, He spoke these words:

"Now if a child can be circumcised on the Sabbath so that the law of Moses may not be broken, why are you angry with me for healing the whole man on the Sabbath? Stop judging by mere appearances, and make a right judgment."

At that point some of the people of Jerusalem began to ask, "Isn't this the man they are trying to kill?"

On another He spoke of the danger of judging others without first taking care of our own business.

The truth found in these teachings from the Master is revealed in conflicting fashion in our daily encounters.

By mere appearances, one might make an assumption about the couple that is far from accurate. There's something about them that might cause one to conclude that their relationship has been brief and riddled with trouble and strife and dysfunction. On closer examination one learns that they have been happily together in one form or another for decades. The smiles they exchange reveal that they continue to be deeply in love with each other.

By mere appearances one might draw the conclusion from the multiple tattoos and body piercings on the young man's body would indicate that he delves into the world of darkness, isolation and perhaps even demonology. On closer examination one would learn that he is a devoted follower of Jesus and that he is one of the key leaders in the youth group of your church.

By mere appearances, one might incorrectly judge that the expensive suits, high-powered and high-priced car, and well-manicured lawn at his house in the gated community would indicate selfishness, snobbery, and pride. On closer examination one discovers that he gives a significant portion of his income to the missions in his church, teaches a Bible Class and meets regularly with a group of Christian brothers in an accountability group.

This week take another look!
By mere appearances, one might assume that the man sitting down the pew from you on Sunday is coming primarily out of a sense of duty and wants very little to do with the body life of your church. On closer examination, it is discovered he was formerly a beloved shepherd for many years, but is now caring for a wife who suffers from Alzheimer's Disease.

If we base our conjectures on mere appearances, we are likely to misjudge, falsely accuse, and make inaccurate assumptions about people we encounter and either erect or reinforce the walls that keep us separate. Jesus pleaded with those falsely accusing Him of blasphemy and plotting His death to stop judging by mere appearances. He pleads with us to be just as careful about how we judge.

This week take another look at that person you have all but written off as a loser, or a troublemaker, or a problem, or an obstacle to be overcome. Look beneath the surface. Look behind the public projection. Look beyond the weary eyes, and the strange colored hair. Look instead into the heart.

"Take a Closer Look" by Tom Norvell is licensed under a Creative Commons License. Heartlight encourages you to share this material with others in church bulletins, personal emails, and other non-commercial uses. Please see our Usage Guidelines for more information.