Would Jesus spit you out of his mouth? 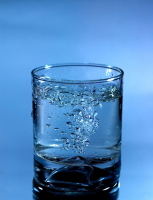 by Tim Archer (01/27/2010) | Hope for Life
The ancient city of Laodicea had a water problem. The problem was there was no water. At least not in the city itself. There were hot springs 6 miles away near the town of Hierapolis. That water wasn't drinkable and would lose its soothing warmth by the time it was taken to Laodicea. At about the same distance in the opposite direction, there were deliciously cool sources of water around Denizli. These waters would also lose their cool temperature when transported to Laodicea, resulting in an unpleasantly warm drink. The only water available to the Laodiceans was lukewarm at best.

When Jesus addressed the Christians of this city in the book of Revelation, he used an illustration they would understand: "I know your deeds, that you are neither cold nor hot. I wish you were either one or the other! So, because you are lukewarm — neither hot nor cold — I am about to spit you out of my mouth" (Revelation 3:15-16). The Greek word translated "spit" is more accurately translated "vomit." It's an unpleasant image for an unpleasant condition: Christians who have lost their passion, who have compromised their loyalty to Christ.

If you're not a Christian and that's the only Christianity you've seen, then I'd urge you to look again. There are Christians who have overcome this perpetual state of apathy. They know that Christianity isn't just about showing up at church at certain times. It's a way of life. As Vanuaken said, such Christians are the best argument for Christianity that exists.

If you are a Christian, but find that lukewarm describes your faith, let me encourage you to go back to the basics. Focus on Bible study and prayer. Find a church and make yourself an active part of it. Reconnect with God each week by participating in the Lord's Supper.

"Hot, Cold or Lukewarm?" by Tim Archer is licensed under a Creative Commons License. Heartlight encourages you to share this material with others in church bulletins, personal emails, and other non-commercial uses. Please see our Usage Guidelines for more information.