What Ever Happened to that Country?

I want to belong to a country that lasts forever. 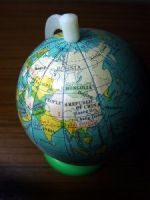 by Steve Ridgell (07/01/2009) | Hope for Life
One of my friends sent me an online geography test the other day. The countries of the world were outlined and you clicked on the name of the country to place it in the proper place. It took me a long time to get it right. I travel overseas frequently and thought this would be easy. I had never heard of some of the countries listed. I was looking for names that were no longer used. I knew I had been out of school for some time, but I thought I kept up with world events. There were countries that divided into smaller countries, and countries that changed names. Boundaries were different than they used to be. My world had changed more than I knew.

Then there are those parts of the world that have clearly defined boundaries, but the tribes and cultures cross those lines. So they have practical boundaries that differ from the formal ones. There are people who have citizenship in one country but live in yet another. Every time the Olympics are held, there are athletes who change allegiances in order to compete for different countries. Some athletes have competed for different counties in successive Olympics.

So how do you claim allegiance to a country that no longer exists? Can you have national pride in a country that is no longer a country? Some nations were quite powerful at one time. Some were empires that ruled much of the world. And now they are gone. Countries just do not last. They never have ... and evidently they never will.

And I am a citizen of a kingdom just like that. You can be too.

It is the kingdom of God.

If you want to know more about becoming a citizen of this kingdom, write me at steve@hopeforlife.org. Or join our blog discussion at www.hopeforlife.org.

(Expressed written consent must be obtained prior to republishing, retransmitting or otherwise reusing the content of this article.

"What Ever Happened to that Country?" by Steve Ridgell is licensed under a Creative Commons License. Heartlight encourages you to share this material with others in church bulletins, personal emails, and other non-commercial uses. Please see our Usage Guidelines for more information.