Undo Send: What a Great Idea!

Don't you wish you could take back some things you've said? 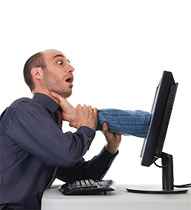 by Rubel Shelly (04/16/2009) | Leading in Hope
You've probably seen the TV commercial about the group sitting around a table, completing a conversation with the boss via phone conference, and hitting the mute button to trash talk him. Just at that moment, a technician walks in to explain he is there to fix the broken mute key. Uh-oh! Bad career move!

In real life this past week, five of us were around a table, completed a phone conference with a person, and thought we had ended and hung up. I was seated immediately in front of the speakerphone and made some comments to our group about him and our call. Then we heard his voice! "You guys may need to hang up on your end," he said. "I seem to be having trouble disconnecting."

Maybe that's why an online article from CNN caught my eye the next day. It was about a new feature called "Undo Send" that Google's Gmail is developing.

"Undo Send" is an option someone can enable on her Gmail account. When she composes an e-mail and hits the send button, an "Undo" button will pop onto the screen for five seconds. Clicking it retrieves the e-mail in draft form and lets the author correct spelling, edit content, or simply cancel the message altogether.

Don't you wish you had a feature like that on your tongue! I could have used it countless times to save myself embarrassment. To keep from offending. To just keep my big mouth shut — instead of firing back some angry or hateful line. But without an "Undo Send" button, it was hurled across that space between me and a friend or mate or stranger. And I was left to try to clean up the mess.

I admit to having learned a few things from living. One of them has to do with the importance of putting a bridle on my tongue. For all the times I still talk when I should be listening, I'm actually better at it than I used to be.

My mother used to tell me to count to ten before speaking. (She saw my need early. I seldom got past about three or four.) Then I grew up, got married, and had more adult responsibilities. I learned the hard way that she had given me some really good advice. Having to apologize and to recoup relationships (when possible!) over time finally taught me the value of restraint.

As you get ready to begin a new week, think about the value "Undo Send" could have for your electronic communications. Make a firm resolve to use its verbal equivalent in your workplace, family, and church this week. And pray for God to give you the restraint to follow through with your commitment.

My mother used to tell me to count to ten before speaking.

If you claim to be religious but don't control your tongue, you are fooling yourself, and your religion is worthless (James 1:26 NLT).

By the way, just in case you were wondering, I said some really positive things about the fellow on the other end of that open phone line. Whew!

"Undo Send: What a Great Idea!" by Rubel Shelly is licensed under a Creative Commons License. Heartlight encourages you to share this material with others in church bulletins, personal emails, and other non-commercial uses. Please see our Usage Guidelines for more information.