Is this really a situation that demands a 911 call? 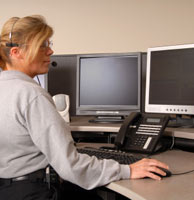 I know what it is to be in need, and I know what it is to have plenty. I have learned the secret of being content in any and every situation, whether well-fed or hungry, whether living in plenty or in want. I can do all this through him who gives me strength (Philippians 4:12-13).

Emergency. For me, the word brings to mind catastrophes. A fire, an earthquake, a tornado. A broken dike that floods a city. A terrorist attack. A violent crime. A terrible accident. To my way of thinking, an emergency requires the intervention of police, rescue, or medical personnel. But maybe I'm too narrow in my definition. Maybe I should broaden my understanding of the word to include, say, a restaurant running out of delicious chicken products.

Latreasa would apparently say so. Earlier this week, she ordered a ten-piece Chicken McNuggetsTM meal at a McDonald's in Fort Pierce, Florida. After she had paid for the food, she was told that they were out of McNuggets. Latreasa became "irate," especially after the cashier told her (mistakenly, as it turned out) that she couldn't give Latreasa a refund. She offered Latreasa another choice from the menu, and that's when Latreasa decided it was time to let the professionals handle this emergency.

Wouldn't you love to hear those 911 recordings? You can!

No, sorry, Latreasa. I can't buy it. Being hungry and completely without food, like many people in the world actually are — that's an emergency. But a restaurant being out of your favorite item, with a whole menu full of alternatives? Well, at best, I'd call that an inconvenience. A minor annoyance.

But, aren't we good at magnifying those minor annoyances into major catastrophes? I mean, maybe you've never called 911 because of anything that's happened at the counter of a fast-food restaurant, but I imagine you've sat fuming in traffic, staring at your watch, thinking about all the important things that weren't getting done while you sat there. Or if not that, maybe you've inflated a small setback at work into a crisis. Perhaps you can relate more to allowing a romantic reversal to send you spiraling into depression or relate to losing your temper at a relatively minor spousal misstatement or misdeed. Maybe it's none of those things specifically, but you get the picture, right? And I'm guessing that you, like me, have been guilty of breaking the glass and pulling the "emergency" alarm just a hair too quickly.

Our problem, I think, is that underneath our grown-up exteriors and our ability, when necessary, to make sacrifices, is still that cosmology we had in childhood. You know the one I mean. The one where I think the world revolves around me.

And if the world revolves around me, then everything that goes wrong for me is potentially an emergency. And, thus, potentially an occasion for sulking, yelling, lashing out, or striking back.

That's why I'm intrigued when Paul says that he's learned "the secret of being content in any and every situation." If you know anything at all about Paul, then you know that he found himself in some fairly hair-raising situations. He was hungry sometimes — not in the sense of wishing he could get some delicious chicken products, but hungry in the sense of literal starvation. He spent some considerable time in jail. He narrowly escaped lynch mobs — or more historically accurate, mobs that wanted to stone him — more than once. He had health problems, relationship problems, and he was even shipwrecked a time or two. And that doesn't even include the stress of travelling all the time, dealing with church problems, and putting up with people who went out of their way to sabotage everything he tried to do.

So when Paul says he's learned to be content, I tend to want to pay attention.

The secret, though, is a little tough to hear. Paul says that his ability to be content whatever the situation comes out of replacing himself as the one around whom the world revolves. With his believe that Jesus had risen from the dead and his decision to let Jesus call the shots in his life, the center of gravity in Paul's life changed. What happened to him mattered not nearly as much as whether or not he lived a life that was faithful to his new calling. And with that perspective, things that he once would likely have considered crises — emergencies — became non-events.

And WE know who to talk to.
And the serendipity of this change, for Paul, was that Jesus became not just Lord, but "him who gives me strength." By choosing to trust the Lord and not hit the panic button when things seemed to go off the rails in his life, Paul discovered a source of strength to endure and overcome that he never would have known otherwise. He discovered that he could not only survive in difficult situations, but that he could thrive — because where his strength ended, there Jesus' power began.

That's the problem in not learning to find contentment in Jesus regardless of circumstances. When we hit the panic button too early, we invariably lurch into crisis mode and try to come up with our own solutions to our problems. Trouble is that our own solutions are almost always about finding a quick way out, with as little personal discomfort as possible.

Worst of all, when we chase our own solutions, we miss out on what the Lord would do for us.

So here's what we do, I think. First, we tell God that, with his help, we're going to find our contentment in him. We're going to trust in his goodness and generosity, and when times are lean we're going to believe that in him we'll have all the strength to endure whatever we have to endure.

Secondly, we tell someone else. We tell other believers that we're working on being more content in God's power instead of our own schemes. We ask them to pray with us and for us, and we ask if we can talk to them about the things we learn about God and ourselves.

Finally, we resist the urge to hit the panic button when things seem to go bad. When we feel like lashing out at someone, we pray instead. When you feel like compensating for sadness or anger with sundaes or substances or sex or shopping, we sing worship songs or read Scripture. When we feel like hiding or sulking, we seek out people who will bless us, or who we can bless.

And when we are weak, each of us will seek him out and discover, with Paul, that we can rely on God, the one who gives us strength.

By the way, McDonald's is sending Latreasa a gift card for a free meal. A spokesperson said that the cashier was mistaken and should have refunded her money. Turns out that Latreasa didn't need the 911 call after all — she just needed to know who to talk to.

The same goes for us.

And WE know who to talk to.

"Emergency?" by Patrick D. Odum is licensed under a Creative Commons License. Heartlight encourages you to share this material with others in church bulletins, personal emails, and other non-commercial uses. Please see our Usage Guidelines for more information.