Why do we chase after what is not substance? 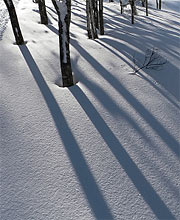 by Rubel Shelly (03/02/2009) | Leading in Hope
There are companies devoted to creating and maintaining "image." Actors, athletes, politicians, executives of major corporations — it is not unusual for them to have someone in charge of their public persona, their image, their reputation.

At one level, I understand the task of such companies or persons. Given the fact that celebrities are marketable in terms of their names, it is not absurd to think that somebody needs to be monitoring what is being said or put on the Internet. Just think, for example, of the image-name value of Tiger Woods.

There is another sense, however, in which image and reputation are quite secondary. One could even say they are unimportant. Since we are just one week past Presidents' Day, I will let Abraham Lincoln make the point here. "Character is like a tree and reputation its shadow," Lincoln is reported to have said. "The shadow is what we think of it; the tree is the real thing."

The man who is almost always selected by both scholars and ordinary folk as the best president in America's history knew whereof he spoke. He might have spoken with a tinge of melancholy in his voice. It likely came from deep thought about the turmoil his role in history forced him to suffer.

Called a "buffoon" by people from his own political party, Lincoln was hardly thought to be the man for the job as the Union was about to be severed. Then, as the Civil War raged, politicians, newspapers, and conversations in village squares indicted him for his ineffective leadership and bumbling prosecution of a war. His tall, gangly frame and big ears led to caricatures and comparisons to an ape. The early signs were not favorable to the greatness we ascribe to him now.

Lincoln lived through the horrible time of the Civil War with personal integrity intact. He wept for the fallen — Rebels as well as Yankees. He was determined to uphold the human dignity of all — blacks as well as whites. He planned to restore the Union with healing grace rather than hateful revenge.

Some scholars cite his second inaugural address as his greatest speech:

With malice toward none; with charity for all; with firmness in the right, as God gives us to see the right, let us strive to finish the work we are in; to bind up the nation's wounds; to care for him who shall have borne the battle, and for his widow, and his orphan — to do all which may achieve and cherish a just and lasting peace, among ourselves, and with all nations.

God's wisdom says it this way:

Whoever walks in integrity walks securely, but whoever takes crooked paths will be found out. (Proverbs 10:9 NIV)

"Don't Trust a Shadow" by Rubel Shelly is licensed under a Creative Commons License. Heartlight encourages you to share this material with others in church bulletins, personal emails, and other non-commercial uses. Please see our Usage Guidelines for more information.