Better than the Super Bowl

Why would you cheer against your own team? 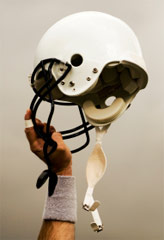 by Rubel Shelly (02/08/2009) | Just for Men
Last Sunday's football game between the Arizona Cardinals and the Pittsburgh Steelers was billed as the Super Bowl. It deserves the title. It is the game toward which everything in the NFL seasons points. The team that wins gets bragging rights as best of the best for the year. So hats off to Pittsburgh for its 27-23 win.

But you'll have to pardon me for thinking a much bigger game was played last November 7 in Grapevine, Texas. It was high school kids. Faith Christian School, sporting a strong 7-2 record, went up against Gainesville State School. Gainesville was 0-8 coming in and had scored a total of two touchdowns all year. Yet it was a "super" game — the brainchild of Faith's head coach, Kris Hogan.

Gainesville State is a maximum-security correctional facility that houses adolescents who have had few breaks and lots of run-ins with the law. They have convictions for robbery, assault, and drugs. Many have no family members who keep in touch with them — and have nowhere to go when their sentences end.

Here was Coach Hogan's idea: Let's play the kids from Gainesville State, show them the love of Christ, let them know they are just as valuable as anybody else on Planet Earth, and pray it will help them see life a bit differently.

Some of his own players were struggling to get it. "Imagine if you didn't have a home life," he explained. "Imagine if everybody has pretty much given up on you. Now imagine what it would mean for hundreds of people to suddenly believe in you." He thought it might make a difference — in both teams.

For that wonderful night in Texas, half of Faith's students, parents, and fans sat on the opponent's side to cheer for them. Those 200-plus souls cheered, shouted encouragement to the Gainesville players by name, and otherwise did everything possible to make them feel special.

Now that was a super football game.
Wearing their seven-year-old shoulder pads and outdated helmets, the boys on the field sensed something special. Accustomed to being feared and avoided, they were being supported. "I never in my life thought I'd hear people cheering for us to hit their kids," said Isaiah, Gainesville's quarterback.

When the game ended — with Faith Christian winning 33-14 — the teams gathered in the middle of the field. It was Isaiah's turn to surprise everybody by asking to lead a prayer. "Lord, I don't know how this happened, so I don't know how to say Thank You," he said, "but I never would've known there was so many people in the world that cared about us." The kids were taken to their team bus in handcuffs to go back to jail. Each was handed a bag from a Faith player — a bag that had a burger, some fries, a soft drink, a Bible, and a personal note.

Now that was a super football game. A super night. A super way for some young men to meet Jesus in a most unusual way.

"Better than the Super Bowl" by Rubel Shelly is licensed under a Creative Commons License. Heartlight encourages you to share this material with others in church bulletins, personal emails, and other non-commercial uses. Please see our Usage Guidelines for more information.