Have you ever wondered how he can stand it? 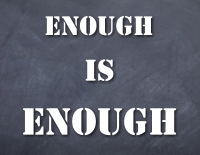 by Bill Brant (01/28/2009) | Hope for Life
Have you ever wondered how he can stand it? Isn't there some point when He says "Enough is enough"? Don't you think He must retch when we curse Him, use His name to curse others, justify killing men, women, children, because He is "on our side"?

When does He draw the line and say "The horrid things you do to yourselves and the planet you live on is more than I can stomach. Go to Ghenna!" Ghenna is used only twelve times in the New Testament, 11 by Jesus Himself as He talks about the place separated from God. The place that Revelation calls "the second death ..." The place where there is eternal damnation and suffering.

The question remains right now, after consistent disappointment and disregard for His love, when does the Creator tell his creation to Go To Hell?

Since before the world was formed, God hasn't given up on his children. He offers them, you by name, a way to live with Him forever.

"For God so loved the world that He gave His only begotten Son, that whosoever believes in Him shall not perish, but have everlasting life."

When does the Creator tell his creation to Go To Hell?

God allowed His son to pay the debt of our sins that we were/are incapable of satisfying. And Jesus gives us the receipt that simply says redeemed.

Do you think God's told you to go to hell? You don't have that receipt marked redeemed? There were others that felt the same way. View their stories on www.hopeforlife.org or if I can help put you in touch with some friends of mine who know the liberating feeling of redemption, email me at bbrant@heraldoftruth.org.

"Enough Is Enough" by Bill Brant is licensed under a Creative Commons License. Heartlight encourages you to share this material with others in church bulletins, personal emails, and other non-commercial uses. Please see our Usage Guidelines for more information.

ToGather: Here, Near, and Far (October 24, 2021)
God loves all the people of the world (John 3:16) and wants us to demonstrate his love for them so they will turn from their destructive ways and be saved (2 Peter 3:9).

What Do We Do About Leadership Abuse?
The description of the Good Shepherd in John 10 aligns beautifully with Jesus' definition of serving and giving himself to bless us in Mark 10.