How can so much be caught up in one word? 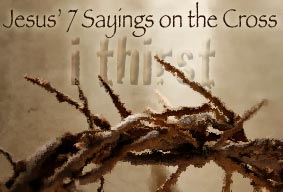 by Phil Ware (08/04/2008) | Two Minute Meditations
See the skinny little shirtless boy, with cut offs and sneakers, and sweat glistening on his buzz-cut head? It's the heat of the summer in west Texas. He runs to the shady side of the house, turns on the spigot, and drinks deeply of the cold, pure, well water. Then he sticks his head under the water and shudders, part in delight and part in shock, as the refreshing chill overrides his system on this scorching-hot summer day. Then, with a wistful look on his face and a twinkle in his eye, he says, "It's your turn!" He positions his hand under the spigot and sprays you with that icy cold well water. You scream and laugh as your body jerks from the shock of the water's chill and your heart is full of joy in the moment.

It's something we all have experienced — thirst. But more than simple thirst, our bodies desperately cry out for refreshment, for hydration, and for survival. A drink of water is our universal need. Without it, we all die.

But in the remembering of this story, there is also a longing for something long gone for most of us. This craving runs much deeper than the well which housed the cold, pure, well water. It's the simplicity of being a child ... the security of having no other needs ... the sweetness of play and the joy of friendship ... that we crave.

When David said, "Oh, how I would love some of that good water from the well in Bethlehem, the one by the gate." (2 Samuel 23:13-17 NLT), he was in need of physical water. He sat in the cave of Adullam, hiding out, cut off from his home and under constant attack. But more than a physical thirst, David had an emotional longing: a craving for a simpler time, when as a boy he ran to the well and slaked his thirst, felt at home, and was satisfied and secure. He was anything but satisfied and secure when he whispered these words, "O for a drink of water from the well at the gate of the city of Bethlehem."

Little did David know, three of his confidants, his mighty men, had overheard his wistful whisper. They penetrated the enemy lines. They got David his water from his well ... and brought it back to him, risking their own lives in the process. Such was their love and loyalty. David was so overwhelmed that he could not drink the water. Instead, he poured it out as a drink offering to God — for God alone was worthy of such risk and sacrifice. But David had his deeper thirst slaked: these men were with him, no matter what happened. They had heard his cry, "O for a drink of water from the well at the gate of the city of Bethlehem!" and brought him water from the well!

Jesus used the images of both physical thirst and spiritual thirst to capture our interest and our hearts. He promised and gave living water to the woman at Jacob's well (John 4:13-15). He promised that those who believed in him would never thirst (John 6:35) because his Spirit would give them real living water (John 7:37-39). Deeper, more reliable and more refreshing, Jesus' well could do more than the well by the gate at Bethlehem or Jacob's well. Jesus is the surety. Jesus is slake for our souls' deepest thirsts!

But in this moment, this awful and wonderful moment we share today, the unthinkable is true. As Jesus' life ebbs away from him and as the crowds jeer and mock him, blood loss and the ordeal of the night before take its toll. We don't know if Jesus recalled the words of David ... or remembered the three mighty men that came to their friend's rescue. We do know that Jesus three "mighty men" all abandoned him. We can't help but believe that Jesus remembered the words, "O for a drink of water from the well at the gate of the city of Bethlehem." It was where that his childhood memories were built. But for Jesus, there was no one to bring him water from the well of his home. Far from crashing through enemy lines, Jesus' mighty men had crashed and burned, leaving him alone to face the thirst of his pain-wracked and dehydrated body and his dry and dehydrated spirit.

"I thirst!" Jesus cried out (John 19:24-30). And the best the Son of David gets is a vinegar sponge laced with something to prolong the torture.

In his own language, his cry was one word: dipsow. We would say it this way: "Thirsty!"

In that one word, God becomes forever linked to us at our most fundamental level. This Jesus, God in human flesh, has chosen to also be mortal ... vulnerable ... needy ... human. Few things speak more clearly to us and show the unimaginable truth of God becoming one of us. "Thirsty." This is the incarnation, the voluntary emptying, as God is one of us in Jesus!

We all at times will feel betrayed, abandoned, abused, and forgotten, so we can deeply appreciate that Jesus suffered these things in the Cross. But in this moment, we see Jesus as all of these and something more: our Lord, in his moment of suffering, is a vulnerable boy in need of a drink and a suffering savior in need of a friend.

God chose to become real to us in Jesus. O sure, he was always real, but we could only see him as real in theory — in our theology and faith. Yeah, there were glimpses when his benevolent actions for mortals were clear and full of grace. But, this is different. God needing a drink of water — God needing mighty men to love and defend him, yet having none — God vulnerable to the same basic need we all have.

Unlike David, whom Jesus had made and appointed and preserved, the Son of David has no one to help and no water to refresh.

Yet in these moments, gory and gruesome with humanity's worst traits, we find our souls refreshed. Like the woman at the well, we hear his voice and follow, leaving our own dirty and worn water pots behind. "Jesus loves me, this I know, He got thirsty to show me so!"

He got thirsty to show me so!
Because of such God-moments in human skin, we can truly believe:

That's why he had to enter into every detail of human life. Then, when he came before God as high priest to get rid of the people's sins, he would have already experienced it all himself — all the pain, all the testing — and would be able to help where help was needed (Hebrews 2:17-18 MSG).

He knows our thirst ... not just because he made the planets or separated the seas from the dry land or placed artesian wells deep within the ground ... but because he was one of us and one with us. Jesus is God come near.

God at our side, drinking from the spigot in the heat of the day, beckoning us to come get a drink of cool water, and when we draw close ... he splashes us with grace, and we shudder with the shock of the chill of such refreshment from God's well of mercy-water, and we laugh with delight to have such a Savior. And with a twinkle in his eye, Jesus looks at us and says, "Thirsty? Yes, I was thirsty! But I did it so you could taste the living water from my Father's well!"

"Thirsty" by Phil Ware is licensed under a Creative Commons License. Heartlight encourages you to share this material with others in church bulletins, personal emails, and other non-commercial uses. Please see our Usage Guidelines for more information.