Ever gotten past just wishing for something? 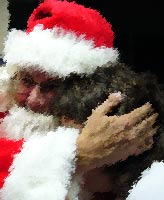 There IS a "Secret Santa." Perhaps you've heard of him. I got an email from him last year after I shared the following story.

This real guy walked into the local thrift store and stepped in front of a fella who tried his best to move out of the way. "I'm Secret Santa and I want you to have this," the stranger said as he handed his victim 2 hundred-dollar bills. "Merry Christmas!"

This anonymous Santa is a businessman from Kansas City. His plan is to cross the country, going into dozens of thrift stores, laundromats and bus stations, and walk up to hundreds of strangers who seem like they could use a Franklin or two and light up their lives.

By Christmas this stranger will have given out $75,000.

"Is this for real?" the victim asked.

The current Secret Santa made a promise to Mr. Stewart, the original Secret Santa, that he would keep the Santa thing alive. Mr. Stewart had invested the last 25 years of his life giving away more than a million dollars — one Franklin at a time.

I think there really is a secret Santa in each of us — it's just a matter of letting him out. God put the spirit of giving in us long before anyone heard of Santa.

Larry had been out of work for months, and in early October his home went into foreclosure. He withdrew $300 from an ATM to use as a deposit on a rent house and put the ATM receipt in his shirt pocket.

With everything happening around him, he forgot the withdrawal. A couple weeks later the bank sent a letter reporting over $1000 in bounced checks along with the NSF fees charged by the bank.

Embarrassed by it all, Larry and his wife kept it to themselves. Both took on part-time jobs. And with Christmas just around the corner, they decided this year would be something small for the girls and nothing for each other. They felt alone and powerless.

Then in mid December Larry found a $400 check in his church mailbox with a note, "From Your Friends. Merry Christmas."

A couple weeks later, on Christmas Eve, the family was watching TV when the doorbell rang. Outside on the porch they found sacks of groceries, a complete Christmas dinner, dresses for the girls, and a shirt and tie for Larry.

"To this day," Larry says, "we don't know who made 3 dresses, and gave us so much at Christmas. It was a defining moment when God reminded us that HE provides."

You don't have to have a million dollars to be a blessing to others. But it would be a great secret calling. There are people all around us who need a bite to eat, a cup of coffee, a smile, a conversation, a kind word, a blessing, a prayer, a gentle lift. Do you see them? You've still got time.

You have something very valuable inside you ... a treasure ... the calling to make a difference in someone this week. God has put it on you ... to give to someone in secret.

Don't waste your time wishing for Santa to come to your house, make a secret trip to a house that needs what you have. Ask God to put you in the path of just the right person this week, the one who needs a visit from secret Santa and then discover the joy of the secret.

"Don't Just Wish It!" by Ron Rose is licensed under a Creative Commons License. Heartlight encourages you to share this material with others in church bulletins, personal emails, and other non-commercial uses. Please see our Usage Guidelines for more information.