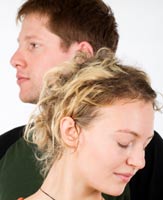 Now take the jump with me to our marriage relationships. Have you ever started thinking about all the differences between you and your spouse?

Problems arise when we expect or assume the opposite gender should think, feel, or act the way we do. Imagine if you bite into an avocado and expect it to taste like a banana. Wow, what a shock! You will get the same shock when you buy your wife a vacuum cleaner she really needs for her anniversary — or dare I remind you, for Valentines Day. Yes, we are different types, like avocados and bananas.

Paul tells the Corinthians, "The body is a unit, though it is made up of many [i.e., different] parts; and though all its parts are many, they form one body" (1 Corinthians 12:12 NIV). Many times the differences that we sometimes find perplexing in marriage are the reasons we were originally attracted to one another. The world, and relationships, can be boring when everything is the same.

We must realize not to take these differences as personal attempts to frustrate each other. Our task is to recognize, discuss, understand and act skillfully in light of our differences — whether these differences occur in our church or in our families.

If you find your self thinking that you and your spouse are about as similar as avocados and bananas, then remember the following about the two fruits — by the way, my wife taught me this. When these two very different fruits are put together, they help each other ripen.

There are three things that amaze me — no, four things I do not understand: how an eagle glides through the sky, how a snake slithers on a rock, how a ship navigates the ocean, how a man loves a woman. (Proverbs 30:18-19 NLT, emphasis added)

"Bananas and Avocados" by Byron Ware is licensed under a Creative Commons License. Heartlight encourages you to share this material with others in church bulletins, personal emails, and other non-commercial uses. Please see our Usage Guidelines for more information.