What do you and where do you go when life isn't fair? 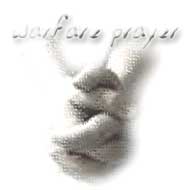 And will not God bring about justice for his chosen ones, who cry out to him day and night? Will he keep putting them off? I tell you, he will see that they get justice, and quickly. However, when the Son of Man comes, will he find faith on the earth? (Luke 18:7-8 TNIV).

No big revelation there, at least not for most of us. That's a reality we learn pretty young. The first time we get in trouble for what someone else did, the first time our parents pronounce another seemingly arbitrary rule, the first time someone or something we love runs away or dies or lets us down, it dawns on us. Sometimes, through tears, we give voice to it in the plaintive cry of every child and, at one time or another, most every adult.

No, it's not! And as anyone within earshot of such a cry is likely to remind us, no one ever said life would be fair. After hearing that a time or two, we stop complaining about unfairness. We start to expect injustice; we start to accept that there will be times in our lives when we're the victims of it. Sooner or later, we even stop crying out about it. We become realistic. We start to dismiss those who still cry out about injustice as "idealists" who "don't understand the way the world works." We learn to just shut up, bite our lips, and carry on. We grow up and realize that in the grand scheme of things, no one much cares about the unfairness in our lives.

Someone sent me a story several weeks ago about an insurance agent near Atlantic City, New Jersey. He found a flowered plastic shopping bag full of letters bobbing in the surf while fishing. The letters, dating to as far back as 1973 and all addressed to Reverend Grady Cooper, were prayer requests, apparently intended to be prayed over by the Reverend and his congregation, Mount Calvary Baptist Church in Jersey City. Cooper died in 2004, and somehow the letters ended up dumped in the ocean.

The insurance adjustor, Bill Lacovara, read all the letters that were still legible. "There are hundreds of lives here, a lot of struggle, washed up on the beach," he said. "This is just a hint of what really happens. How many letters like this all over the world aren't being opened or answered?"

Lacovara says that most of the letters are "heartbreaking." There's one from a man who says he's imprisoned for a crime he didn't commit and wants to be back home with his family. A woman wrote that her boyfriend was now closing the door to her daughter's bedroom each night and wondered why. An unwed mother wrote that her baby was due in four weeks, and asked God to make the father fall in love with her and marry her so the child would have a father. And then there's the letter written on yellow-lined paper in curlicue schoolgirl handwriting begging God for forgiveness and a second chance: "Lord, I know that I have had an abortion and I killed one of your angels. There is not a day that goes by that I don't think about the mistake I made."

Lacovara says reading the letters made him sad that most of the writers never had their letters read. He intends to change that, he says, by putting them up for sale on eBay. Go figure!

Life isn't fair. Many, perhaps most, of the writers of those letters are victims of that unfairness reality, caught in circumstances not entirely of their making and struggling through the best way they can. Even those whose troubles originated from their own mistakes are victims of the injustice of life to some extent, because plenty of people who made the same mistakes don't have to pay the same price. The prayers reflect the injustice of life.

And they also reflect the stubbornness — or maybe the desperation — of faith.

The people who wrote and presumably prayed those prayers refused to be quiet. Despite their powerlessness to change their situations, they refused to stoically accept unfairness and injustice. They had the faith to cry out to God and ask that he make things right. They had the trust and the guts and maybe just the right amount of desperation to believe that God cared enough about them to hear their cries and maybe even grant their pleas.

Maybe the God we know is too polite. Maybe we think of him as a stained glass God who smiles beneficently on our good works and religious observance from a distant heaven — far too distant for him ever to see our struggles or hear our cries. And so we just keep quiet. We say the words we've been told he wants to hear ... and we do things we've been informed that he wants us to do ... and we keep our heads down and our upper lips stiff and struggle through the unfairness of life as best we can. And when we can't help but be confronted by the realities of life in this world, we comfort ourselves with thoughts that maybe one day we'll get to live in God's world and all will be well.

The God Jesus knew and came to show us is a God who does not keep putting off his people. He's a God who hears our cries, who knows the pain and anger and fear that keeps us awake nights, and who will see that [we] get justice, and quickly. He does not leave our prayers bobbing in the surf, but is moved by love to respond when we call out to him.

Need evidence that this is true? Look no further than the man who made that promise: Jesus of Nazareth! He was a real man who lived in a real place at a real time in our real and unjust world. But he was not just a man! He is Immanuel, "God With Us."

God knows that life isn't fair. He knows because he lived among us in Jesus and felt its unfairness first hand. He experienced poverty and hardship ... rejection and threats ... from the sting of the lash and the piercing of the nails ... while always facing the suffocating and paralyzing reality of the Cross. The coming of Jesus tells us in no uncertain terms that God hears our cries, knows our need, and responds in love and grace.

But, the cross wasn't the end! Jesus' resurrection testifies that God is a God of justice. And when he comes back again to take us home, whatever hasn't yet been made right will be. You may not have to wait that long, but if you do, you can wait confidently in Jesus Christ, believing that the justice to come has already been accomplished.

Do you have faith enough to cast another prayer upon the waters, believing that even if no one else receives it, your Father in heaven does?

"Not Fair!" by Patrick D. Odum is licensed under a Creative Commons License. Heartlight encourages you to share this material with others in church bulletins, personal emails, and other non-commercial uses. Please see our Usage Guidelines for more information.