Working on Your Soul

What in the world does Ray Romano have to do with soulwork? 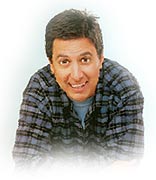 by Rubel Shelly (11/08/2006) | Special Features
One of the most popular TV sitcoms of the past decade was "Everybody Loves Raymond." It was built around the comedic work of Ray Romano. A former stand-up comic became one of the most successful and highly paid personalities in his lucrative industry.

When the final episode of the show was completed in May 2005, Romano walked out on the set and spoke to the studio audience. He told them about a note his brother had stuck in his luggage when he moved from New York to Hollywood nine years before. "My older brother Richard wrote, 'What does it profit a man, if he gains the whole world, and loses his soul?'" said a tearful Romano. "Now I'm going to work on my soul." I hope it is going well for him.

By the standards most of us use, anybody that popular and that rich has everything anybody could want. But it isn't just a tired old cliché which holds that money can't buy happiness. There really is more to life than fame and fortune.

Paying attention to your soul means, above everything else, having a relationship with your Creator. You are not on this planet as the result of blind chance and purposeless fate. You were created in the image of God and destined to bear his image. He has dreams for you that he wants to come true. They are less about your clothes, car, and bank account than your sense of joy, peace, and fulfillment in your once-around experience called life.

When Scripture speaks of seeking and doing the will of God, it is not offering us religious coercion or guilt-ridden consciences. It is envisioning a life in which we connect our brief little personal experiences with God's eternal dream of men and men living together in a community of respect and goodwill. The one perfect example of what that sort of life looks like is Jesus of Nazareth.

So paying attention to our souls means being a radical in your culture. You don't exploit or use people; you treat them as you would like to be treated. You don't live to accumulate and consume; you live to share and help others with what you have. You don't find worth by bullying or turning heads; your worth is in making things better for others.

It is so easy to get distracted by the daily grind. And it is success even more than failure that can make us miss the point of being alive. So how are things coming along for you in the work you need to do on your soul?

It is so easy to get distracted by the daily grind.
The comedian has reminded us of something quite serious.

And He summoned the crowd with His disciples, and said to them, "If anyone wishes to come after Me, he must deny himself, and take up his cross and follow Me. "For whoever wishes to save his life will lose it, but whoever loses his life for My sake and the gospel's will save it. "For what does it profit a man to gain the whole world, and forfeit his soul? "For what will a man give in exchange for his soul? (Mark 8:34-36 NASB)

"Working on Your Soul" by Rubel Shelly is licensed under a Creative Commons License. Heartlight encourages you to share this material with others in church bulletins, personal emails, and other non-commercial uses. Please see our Usage Guidelines for more information.