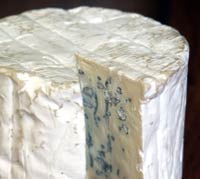 But thanks be to God, who always leads us as captives in Christ's triumphal procession and uses us to spread the aroma of the knowledge of him everywhere. For we are to God the pleasing aroma of Christ among those who are being saved and those who are perishing. To the one we are an aroma that brings death; to the other, an aroma that brings life. And who is equal to such a task? (2 Corinthians 2:14-16)

It's been said that Stilton cheese, the strong-smelling blue-veined cheese from Great Britain, smells like "old socks." Even fans of the, um, "aromatic" cheese have to admit that it makes its presence known. No matter how much you enjoy eating it, it's doubtful that anyone would want to wear it as a perfume.

The Stilton Cheesemakers Association hopes I'm wrong about that, though.

The Association has commissioned a perfume maker to produce Eau de Stilton, a perfume inspired by the aroma – or stench – of Stilton cheese. The fragrance is described as featuring a "symphony of natural base notes including Yarrow, Angelica seed, Clary Sage and Valerian."

Well, who doesn't want to smell like yarrow and clary sage?

An association spokesperson said, "Blue Stilton cheese has a very distinctive mellow aroma and our perfumier was able to capture the key essence of that scent and recreate it in an unusual but highly wearable perfume." Unusual but highly wearable; just what that special someone might be looking for in a fragrance. In case you're interested, Eau de Stilton is available on the Stilton Cheesemakers Associate website, www.stiltoncheese.com.

But they aren't the first to recognize that the same smell that might remind some of old socks might be to others a beautiful fragrance. My wife's uncle enjoys the smell of a skunk – there's no accounting for taste.

And in case you aren't aware of it, we as believers in Christ are just such an aroma. Thinking of the victory procession of a Roman general, with its pageantry and POW's in chains following behind, Paul pictures Christ as the victorious general leading those he has captured, us, in a procession before God. And thinking of the incense offered in thanks to the gods that would fill the air at such a celebration, Paul says that Jesus uses us to spread "the aroma of the knowledge of [God] everywhere." "We are to God the pleasing aroma of Christ," he says. Where believers are, there the aroma of Jesus Christ should hang in the air.

It hangs in the air because where believers are, the gospel of Christ is spoken. The story in which we have put our hope is a story that begs to be told, and so we tell it. In our offices, at school, in our neighborhoods, in our churches, the gospel of Jesus is told. We tell of his love, of his sacrifice, of his resurrection, of our hope in his coming again, and the aroma of Christ permeates the places where we live and work and play and gather.

It hangs in the air because where believers are, the life of Christ is lived. When we serve the weak and overlooked, feed the hungry, minister to the sick, comfort those who mourn, love those who are hated, and take the part of those who are oppressed, we allow Jesus to live in us. He serves with our hands, walks with our feet, speaks with our mouths, utilizes our resources, and cries our tears. When we forgive those who have injured us, bear the wounds of those who hate us bravely, and welcome into our arms those who have sinned against us, the world around us catches the scent of Jesus. When we refresh those weighed down by their own guilt, when we point them toward the God who forgives their sins and frees them from their regrets, they inhale the aroma of Christ.

Who doesn't want to smell like yarrow and clary sage?
It hangs in the air because where believers are, the values of Christ are held dear. When we live in the present with an eye on the horizon, the world notes the unfamiliar perfume. When we face life and its uncertainties with joy and hope, they sniff the air quizzically. When we noisily celebrate what God has already done, while waiting with anticipation for what he will do, the heady fragrance of the kingdom of God disperses the noxious, choking odors of the world's preoccupation with now and more. When we give thanks for our bodies and physical sensation without thinking that physical sensation should drive the bus, the aroma of Christ overpowers the rank smell of unrestrained carnality.

Some will smell that aroma, and smile, and realize that this is what they've been waiting their whole lives for. They will detect the base notes of life in the aroma of Jesus. Others will not be so receptive. All they'll smell in the aroma of Christ is death; death of their way of life, death of their illusory and temporary freedom, death of their self-centeredness. They will respond, well, kind of like I imagine I would respond to my first whiff of Eau de Stilton: with aversion, distaste, and avoidance.

That isn't our worry, though. There's an interesting fact about the human sense of smell; we can get accustomed to almost anything. A nose that's trained can pick out pleasant scents even in smells that most of us consider unpleasant.

May our lives continue to spread the aroma of Christ in the places where God has sent us. May his scent so permeate our lives that those who know us cannot help but smell him on us. And may God give those around us the discernment to appreciate the fragrance of life when they smell it.

May the aroma of Christ in our lives be, to the world around us, "highly wearable and unusual."

"Fragrance" by Patrick D. Odum is licensed under a Creative Commons License. Heartlight encourages you to share this material with others in church bulletins, personal emails, and other non-commercial uses. Please see our Usage Guidelines for more information.