I Fall Down a Lot

What's so hard about getting up for you? 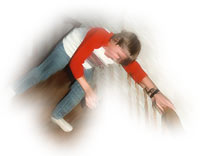 by Russ Lawson (06/23/2005) | Special Features
Our four year old nephew, Mason, tripped and fell down last night. That in itself is nothing surprising. He has muscular dystrophy and doesn't always have complete control of his legs. What was a surprise were the results of the fall this time. He hit his head on the edge of the tile floor and that made a deep 3 inch gash down the middle of his forehead. Several hours at Children's Medical Center and over 60 stitches later, and he was sent home with orders to wake him every couple of hours.

Everyone connected with Mason was really upset and concerned about his accident — everyone, except Mason! He just seems to take it in stride and go on without letting it become the focus of his life. My mom, his grandmother, told me that a couple of weeks ago he told her, "I fall down a lot." He seems to have accepted that as part of the way life is for him; he understands it and gets on with his life.

The question that comes to mind for me is this: Why can't I do the same?

If most of us would admit it, we would have to say, "I fall down a lot." We stumble over our own weaknesses. We sometimes stumble over temptation which is thrust in front of us. Sometimes what trips us up is what "the other guy" does or has done to us. When we get in that situation, far too often we focus on how bad we have it or how bad our fall (our sin) or their fall (their sin) was. Before long, we forget to get up, get over it, and get on with our lives.

The apostle Paul once told us the secret of his success in life. We know he considered himself completely unworthy for heaven. We know that he had people acting extremely ugly towards him all the time. We know that he even had several attempts made on his life. Yet he never gave up. He never focused on the fall. He never focused on the ugliness around him. Instead, he focused on God. He understood that he didn't have to measure up to his own or other people's standards, he only had to satisfy God.

Look at what Paul said about his life and his focus:

No, dear brothers and sisters, I am still not all I should be, but I am focusing all my energies on this one thing: Forgetting the past and looking forward to what lies ahead, I strain to reach the end of the race and receive the prize for which God, through Christ Jesus, is calling us up to heaven. (Philippians 3:13-14 NLT)

Why can't I do the same?
Shouldn't we, like Mason, just admit it? "I fall down a lot." Shouldn't we also add, "I need to focus on getting up and running the Christian race anyway?"

May our God give you the strength to never give up and may he bless you with the innocence of a four year old so that you can admit that there is a problem and then get over it and get on with living for Him!

"I Fall Down a Lot" by Russ Lawson is licensed under a Creative Commons License. Heartlight encourages you to share this material with others in church bulletins, personal emails, and other non-commercial uses. Please see our Usage Guidelines for more information.