Do you know your janitor's name?

Let's ask God to give us the wisdom we need to live for Him and live with His character. 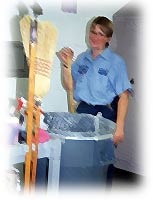 by Alan Smith (04/22/2005) | Timely Truths
The author of the following story is unknown to me, but this story has been around awhile in email and also on the web. It touched and convicted me the first time I read it. It still conveys a powerful message.

People deserve our attention and care.

During my second month of nursing school, our professor gave us a pop quiz. I was a conscientious student and had breezed through the questions, until I read the last one: 'What is the first name of the woman who cleans the school?" Surely this was some kind of joke. I had seen the cleaning woman several times. She was tall, dark-haired and in her 50s, but how would I know her name?

"'Absolutely,' said the professor. 'In your careers you will meet many people. All are significant. They deserve your attention and care, even if all you do is smile and say hello.'

"I've never forgotten that lesson. I also learned her name was Dorothy."

When you look at the life of Jesus, one of the things that stands out is the value Jesus placed on people. He didn't just see everybody as a mass of humanity; he made an effort to know people on an individual basis. And as he came to know them, he acknowledged and met their needs.

The story of Zacchaeus is typical of so many of Jesus' encounters:

Now behold, there was a man named Zacchaeus who was a chief tax collector, and he was rich. And he sought to see who Jesus was, but could not because of the crowd, for he was of short stature. So he ran ahead and climbed up into a sycamore tree to see Him, for He was going to pass that way. And when Jesus came to the place, He looked up and saw him, and said to him, "Zacchaeus, make haste and come down, for today I must stay at your house." (Luke 19:2-5 NKJV)

People deserve our attention and care — even those people who may seem to be "insignificant." By the way, do you know the name of the person who cleans your school, church, or workplace? If not, I encourage you to find out.

"What's Her Name?" by Alan Smith is licensed under a Creative Commons License. Heartlight encourages you to share this material with others in church bulletins, personal emails, and other non-commercial uses. Please see our Usage Guidelines for more information.