What does God do with those times in our lives we'd like to forget? 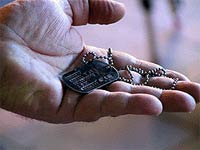 by Rubel Shelly (04/12/2005) | Special Features
V.R. Roskam of Wheaton, Illinois, visited Ho Chi Minh City, Vietnam, three years ago. He and his wife, Martha, were browsing at a souvenir stand. They spotted a wicker basket with a number of items — 37 as it turned out — that looked familiar. They were dog tags lost by U.S. soldiers during the 1960s and '70s.

Roskam, a 75-year-old Korean War veteran, knew immediately what he had to do. He bought them all. For the past three years now, he has been returning them to their rightful owners. So far he has tracked down nine, and he has personally gone to each one to present him his tags.

As you might expect, this mission of respect has triggered powerful emotions in all the parties involved. Some people who served in Vietnam have spent decades now putting that chapter of life behind them. Others have been stuck in them and unable to move on. Many bear scars from that time – not only on their bodies but especially in their psyches.

Denzil Messman lost his tag when he jumped from a helicopter into a firefight. He was still a teenager when it happened. The Roskams went to Jefferson, Texas, to return his small, thin piece of metal designed to tell a medic a wounded soldier's blood type or, if he didn't make it, a chaplain his faith. "This big burly guy just wept when he held it," Martha Roskam said.

"It's kind of hard to explain," said Messman, retired at 55 from the postal service. "Them dog tags is a piece of your person. They become you."

Another veteran who received his dog tag from the Roskams wrote them a touching note. "It has been 30-plus years since my return from South Vietnam," said Regiland Gay, "and no one has said thank you!"

Bad memories, good memories, things appreciated, things not, things you barely remember, things you'd give anything to forget — all are part of your life story. Some are whole chapters. Some short paragraphs. Some mere footnotes.

One way to think of redemption is in terms of authentic human identity. God doesn't want to sell you "fire insurance," but to help you make sense of every step along the path we call life. So he celebrates triumphs, forgives failures, and gives hope for the future. He calls us into community for the sake of learning to treat one another as we would all like to be treated. And his kingdom is among us.

His kingdom is among us.
You can't change the past. You can't un-ring a bell. You can't recapture lost time. But you can trust God to work everything to the good of those who love him.

We know that all things work together for good for those who love God, who are called according to his purpose. (Romans 8:28)

"Reclaiming Our Lost Identity" by Rubel Shelly is licensed under a Creative Commons License. Heartlight encourages you to share this material with others in church bulletins, personal emails, and other non-commercial uses. Please see our Usage Guidelines for more information.