The Least of These

What have you done for Jesus lately? 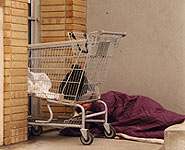 by Bill Sherrill (08/07/2004) | Special Features
The sun rises and the sun sets. It makes its rounds each day. What has it seen? Though there is a great difference in the scenes over which it passes on its daily course, there are patterns which do not seem to change.

In every country there are the rich and the poor. When Jesus said, "The poor your have with you always," (Mark 14:7) He was not limiting His pronouncement to Judea. It was a fact that would span both distance and time. Even as the Rich Man was little aware, and without doubt, unmoved by the plight of Lazarus, sitting in misery at his gate and desiring only the crumbs that fell from his table, many today with wealth to spare look the other way when poverty shows its hollow eyes and bloated bellies.

We would not deny that there are those who constantly and sacrificially pursue the benefit of the poor, but they find great resistance as they seek aid from a world blinded by its own selfishness and dying from its own overindulgence. One of the least watched programs on television is one which graphically portrays the plight of those human wretches huddled together in desperate situations, teetering on the brink of starvation. Hollow-eyed and bone-thin, they are unwanted reminders of man’s inhumanity to his fellows. Those who with loud cries denounce the atrocities of the prison camps of World War II, turn a deaf ear to the cries of hungry children in an unfair and uncaring world.

In the United States there was of late a fad of wearing bracelets with the letters WWJD. These initials stand for the phrase, "What Would Jesus Do?" Many are reminded of the acts of morality which Jesus showed by His life of purity, but few appear to be stirred by His most pointed judgement.

The Lord is still out there in the multitudes.
Depicting the final judgement, He sums up the lives of those blessed by the Father and those cursed for eternity. Their acts bear little resemblance to the mighty works of holiness so touted by many religious leaders in our day. Rather, His judgement fell on the simplest of things. "I was hungry, I was thirsty, I was a stranger, I was naked, I was sick, I was in prison." Heaven and hell hung on how one responded to these situations. Did they help or did they ignore? That was the test. The protest from both sides was, "When did we see You" — and the Lord’s response was, "It was what you did to the least of these that was done to Me."

It still is! The Lord is still out there in the multitudes, hungry and faint and poor. Have you fed Him? Did you give Him a drink? How would He judge you if you stood before Him today? The sun still rises, the sun still sets and in its course it passes over the acts of man. But it is not what the sun sees that we must be concerned about, it is what the Son sees. And He sees it all!

"The Least of These" by Bill Sherrill is licensed under a Creative Commons License. Heartlight encourages you to share this material with others in church bulletins, personal emails, and other non-commercial uses. Please see our Usage Guidelines for more information.