How much joy do you get out of sacrifice? 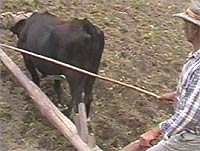 by Alan Smith (07/30/2004) | Timely Truths
I heard a story once about two wealthy Christians, a lawyer and a merchant, who traveled with a group that was going around the world. As they were visiting in Korea, they saw by the side of the road, a field in which a boy was pulling a crude plow and an old man held the plow handles and guided it. The lawyer was amused and took a snapshot of the scene.

He turned to the missionary, who served as their interpreter and guide, and he said, "That's a curious picture. I suppose they are very poor."

The guide replied, "Yes, that is the family of Chi Noue. When the place of worship was being built, they were eager to give something to it, but they had no money, so they sold their only ox and gave the money to the church. This spring, they are pulling the plow themselves."

The men were silent for several moments. Then the businessman replied, "That must have been a real sacrifice."

The guide said, "They do not call it that. They thought it was fortunate that they had an ox to sell."

I am reminded of a parable Jesus told: "The kingdom of heaven is like treasure hidden in a field, which a man found and hid; and for joy over it he goes and sells all that he has and buys that field." (Matthew 13:44)

He does so with joy.
Notice carefully the words, "for joy." This man doesn't just sell everything he has; he does so with joy. He doesn't regret it. He doesn't complain about the sacrifice he has to make. In fact, he probably doesn't even consider it to be a sacrifice. He gives a lot for the field, but he gets so much more in return.

When I perform a wedding ceremony, I often include these words: "Whatever sacrifice you will be required to make to preserve this common life, always make it generously. Sacrifice is usually difficult. Only love can make it easy; and perfect love can make it a joy."

The same thing holds true in our walk with Christ. Sacrifices will be necessary, and only a deep love for Christ will make them a joy. The real test of our commitment is not so much whether we are willing to make sacrifices for our Lord, but whether we are able to make those sacrifices with joy.

"Finding Joy in Sacrifice" by Alan Smith is licensed under a Creative Commons License. Heartlight encourages you to share this material with others in church bulletins, personal emails, and other non-commercial uses. Please see our Usage Guidelines for more information.