What do you not want anyone else to know? 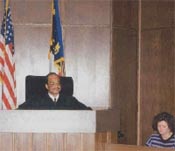 by Alan Smith (07/23/2004) | Timely Truths
A small town prosecuting attorney called his first witness to the stand in a trial — a grandmotherly, elderly woman. He approached her and asked, "Mrs. Jones, do you know me?"

She responded, "Why, yes, I do know you Mr. Williams. I've known you since you were a young boy. And frankly, you've been a big disappointment to me. You lie, you cheat on your wife, you manipulate people and talk about them behind their backs. You think you're a rising big shot when you haven't the brains to realize you never will amount to anything more than a two-bit paper pusher. Yes, I know you."

The lawyer was stunned. Not knowing what else to do, he pointed across the room and asked, "Mrs. Williams, do you know the defense attorney?"

She again replied, "Why, yes I do. I've known Mr. Bradley since he was a youngster, too. I used to baby-sit him for his parents. And he, too, has been a real disappointment to me. He's lazy, bigoted, he has a drinking problem. The man can't build a normal relationship with anyone and his law practice is one of the shoddiest in the entire state. Yes, I know him."

At this point, the judge rapped the courtroom to silence and called both counselors to the bench. In a very quiet voice, he said with menace, "If either of you asks her if she knows me, you'll be in jail for contempt within 5 minutes!"

It's rather frightening, isn't it, to think of someone knowing (and sharing) everything there is to know about us! In the book of Revelation, seven letters are sent from Jesus Christ to seven churches in Asia Minor. Each of the letters begins with the same words:

It is a sobering thought to know that as we stand before the great Judge, there is one who knows all about us. May that knowledge serve to motivate us to live righteous lives.

"God will judge us for everything we do, including every secret thing, whether good or bad." (Ecclesiastes 12:14 NLT)

"God Knows!" by Alan Smith is licensed under a Creative Commons License. Heartlight encourages you to share this material with others in church bulletins, personal emails, and other non-commercial uses. Please see our Usage Guidelines for more information.