How do we get un-stuck in a situation like this? 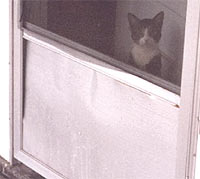 by Janice Price (07/06/2004) | Special Features
"Mew. Mew." I could hear the faint cry intermittently. What has that kitten gotten into this time I wondered, but I was rushing to get to a meeting and didn't check on her right away. I snapped a leash on Merci and hurried her out the front door. We walked around the house to the back yard.

"Mew. Mew." The doors and windows were closed. Why could I still hear Cyndi's tiny cries?

I turned and there she was. Spread-eagled against the screen, crying pitifully and hanging on by her claws as she pulled herself heavily up the screen door. She was inadvertently locked between the two doors when I took out the trash.

As sorry a sight as she was, I laughed. Now I know what Crystal looked like from the other side of the screen when he was locked between the same two doors. Only he's a full-grown tomcat and there was barely room for him to stand. I don't know how long he stood on tiptoe, but ever since he moves quickly when the door starts to close.

We have all been there. Hemmed in by circumstances beyond our control or sometimes of our own making, able to see there's no one around to rescue us, but unable to go forward, back up, or turn around. It's a terrifying place to be ... unless we have hope.

The eyes of the LORD are on the righteous and his ears are attentive to their cry. A righteous man may have many troubles, but the Lord delivers him from them all. (Psalm 34:15, 19 NIV)

It's a terrifying place to be ... unless we have hope.
God once led the Israelites between two doors. He trapped them between the Red Sea before them and Pharaoh's army behind them, and then he delivered them by parting the Red Sea.

"Between Two Doors" by Janice Price is licensed under a Creative Commons License. Heartlight encourages you to share this material with others in church bulletins, personal emails, and other non-commercial uses. Please see our Usage Guidelines for more information.